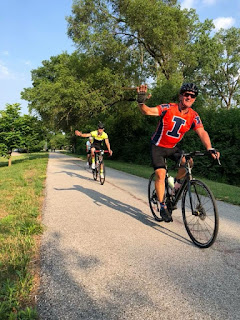 With the prospect of three tough days ahead today was another relatively easy stage and the BBC and the Euros rolled out of Indianapolis bound for Richmond. I was rather fetchingly kitted out (well I thought so) in a new orange and blue Illinois Fighting Illini college jersey that I bought on our last rest day in Champaign. Rather frustratingly I had a puncture within the first five miles – another of those infernal truck tyre wires. Fortunately the team rallied round and the tube change was made in very short order. An added bonus was that Mary, who was driving one of the support vehicles today, pulled up with a track pump at exactly the right moment. (Good on ya!) So in less than 5 minutes I was rolling again. Having a puncture in the first few miles of a stage can often set the tone for the rest of the day so I was delighted not to suffer any further misfortune. Indeed today was a very relaxed, almost leisurely affair with several stops for photos and refreshments as well as some good natured chit chat in between. 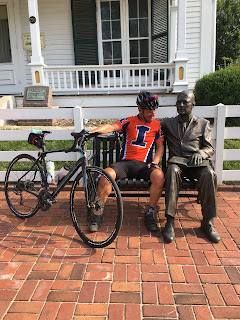 Passing through Greenfield at about 20 miles guess who I spotted sitting on bench? James Whitcomb Riley, the well-known Hoosier poet, author and entertainer. So I pulled over for a chat with him. Now I guess I ought to come clean at this point. When I say that I pulled over for a chat with James, I am talking metaphorically, not literally. He was born in Greenfield in 1849 and now his statue sits gracefully on a bench on the sidewalk surveying all who pass by. Riley’s career received an early boost with an endorsement from Henry Wandsworth Longfellow (author of The Song of Hiawatha) and his most famous works include “Little Orphant Annie” and “The Raggedy Man”, the latter providing the inspiration for the Raggedy Ann doll, beloved of many children.

From my post-ride research I have discovered that Hoosier is the collective name for the inhabitants of Indiana – hence Indiana been known as the Hoosier State. The source of the name is uncertain but it was in common use by the 1840s. Sadly, the term is also used in a rather more derogatory fashion, which I am not going to get into here. 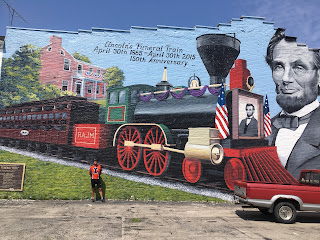 Every so often on a ride you get an entirely unexpected surprise. Riding in one direction means that I often fail to spot a sight or feature. But sometimes you get a lucky hand as I did today. With hot, humid conditions we pulled into a gas station in Cambridge City to get a cold drink. Cambridge City, which is named after the university city near where I live in the East of England seemed a nice place With the number of Stars and Stripes flags and banners on display along the Main Street it was clearly a patriotic place. It is apparently also a highly popular place for antique collectors to visit. Well, while downing my drink on the gas station forecourt I happened to look back towards the direction we had come from and right in front of me was a magnificent mural. Not just any mural either but a depiction of Abraham Lincoln’s funeral train which transported the late Presidents coffin from Washington DC to Springfield, Illinois. The train passed slowly through Cambridge City at 4:15am on 30 April 1865. Although not scheduled to make any official stops it did in fact stop three times in Cambridge. The first lasted 5 seconds outside the home of General Meredith, a friend and ally of Lincoln, where the whistle was sounded in tribute. Then the train stopped a second time  for 15 seconds at the grand arch in the city centre so that 3,000 townspeople could pay their respects. Finally the trainUIKEYINPUTDOWNARROW stopped at level crossing on the western edge of the city, though I am not sure why. The larger than life mural, by Pamela Bliss, was unveiled in April 2015 to mark the 150th anniversary of Lincoln’s death. This was part of a bigger commemoration of the event when the entire city was decked out in mourning, just as it was a century and a half before. So it just goes to show that sometimes it is well worth looking over your shoulder. 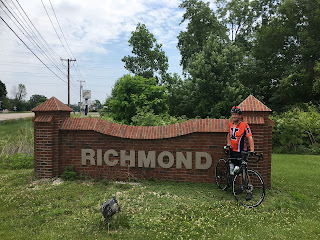 From Cambridge City to Richmond was an easy spin. And Pete and I paused for the usual stage end photos in front to the town sign. And, no we didn’t have to look over our shoulders; we saw it coming!