Today’s report picks up where yesterday’s finished – rollers, lots of rollers. In fact 148 rollers so I am told.  We rolled out of Chillicothe along US36E heading for Brookfield, 36 miles away. Above us, grey clouds and heavy air suggested a change in the weather might be on the way. The air even felt wet, if you can imagine that. Ahead of us lay an angry yellow sky with sunbeams and showers falling on the horizon. Amazingly we haven’t had any rain on the road since we left LA nearly one month ago. I’m going to repeat that for the benefit of my British cycling chums. WE HAVEN’T HAD ANY RAIN FOR NEARLY A MONTH! Looking at the daily weather forecasts we seem to have had the most extraordinary luck as our route has meandered eastwards around some pretty severe weather.

As we rode along on a quiet early Saturday morning I found myself thinking of a song by The Doors – Riders on the Storm from their iconic album, L.A. Woman. It opens with the sound of rain falling and after a few seconds John Densmore and Robby Krieger lay down a rolling pattern on percussion and guitar before Ray Manzarek comes in on electric piano with a melody that sets the pattern for the song. After about 45 seconds Jim Morrison joins in with the simplest of lyrics delivered in his languid style. The song  is hugely atmospheric and over the next 7 minutes it grows and builds to a fabulous conclusion. If you haven’t heard it, then give it a listen. It properly captures what I was feeling this morning on US36E.

Once again today we were really lucky and the stormy weather dissipated leaving blue skies, hot sun and that strength sapping humidity. It seems as if Zeus, the god of clouds, rain, thunder and lightning is keeping a distance from us – for now at least!

A couple of miles before we left the highway I had the misfortune to suffer a rear wheel puncture, my first for several days, the cause being another of those tiny truck tyre blow out wires. With help from Pete I was soon up and running again (we’ve had a lot of practice) and we turned off at Brookfield for a water refill stop, a sort of halfway house SAG. From here we were onto the roller coaster road. Always up or down and rarely level. To give you a sense of the route here’s a picture of the route profile. This only hints at the challenge. You’ll need to ride the road to get its full measure. 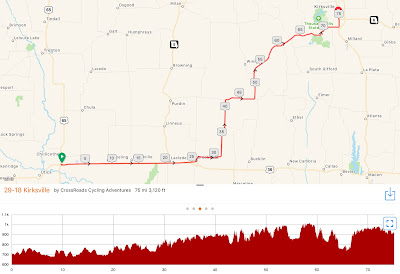 A combination of gradients which varied between 2% and 10%, the hot sun and high humidity slowly sucked the energy out of my legs. I also realised that I was drinking significantly more water and electrolyte energy drink than I normally do. And I was sweating buckets – my jersey and base layer were drenched. On the positive side, the landscape was outstanding. The rolling terrain, a mix of open fields – arable and grazing, trees, hedgerows and woods meant that there was lots to look at and take in. I passed countless delightful properties – farms and ranches as well as houses, many of which were tucked away in the woods. They all gave the appearance of an extremely well-managed countryside.  Add to this the quiet, well surfaced roads and once again this was another day of excellent, if challenging riding. 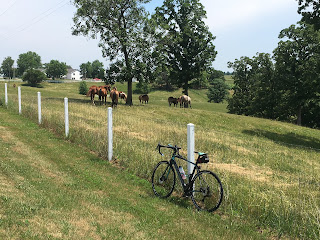 Pete had a minor mechanical when his drivetrain appeared to be slipping which made gear changes to cope with the gradients very difficult. Initially the cause seemed to be rear wheel through axle bolt which was loose. Closer inspection at the end of the stage with the assistance of Rick, the tour mechanic, revealed a faulty free hub so he’ll need to get it looked at on our next rest day in a couple of days time at Champaign. Meanwhile with Rick’s assistance he’s good to go. 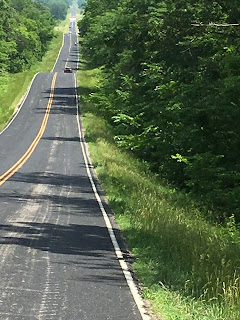 Riding along it dawned on me that this would be a great route for a road race, or better still, a stage on a multi-day tour. I could imagine a small group going up the road and quickly gaining a few minutes once they were out if sight of the peloton which would coast along behind them. Perhaps even a couple of daredevil breaks for glory from the lead group. Would they reach the finishing line before being swept up by the peloton with a sprint finish to decide the result? I could see a few motorcycles with tv cameras and a helicopter or two hovering above. I am sure this would make for exciting viewing. Normally, I find watching live road racing a tad dull and prefer to catch up with the edited highlights. Today’s road seemed to me to have loads of potential to showcase some fast, furious and exciting professional racing. I wonder where I’ve put Christian Prudhomme’s ‘phone number? (For non cycling readers he’s the head honcho of the Tour de France, which, incidentally is almost upon us. Will the Froomedog complete his quintet of victories to join the greats?)


Like most of the tour team, today by the time I reached the SAG at 50 miles I felt rather flat. Paula was on hand with a cup of fresh fruit salad which, as if by magic, provided just I needed to boost my energy levels. It’s these little surprises that can make such a difference on a tough day. As I chowed down my apple, grapes, melon and orange I sensed that everyone around me was feeling a bit flat. Normally we are a fairly lively bunch, keen to share our insights on the day so far – especially with riders we don’t see often. There is usually a lot of happy chatter. Today it was a bit quieter. John, who I quite often catch up with at SAGs, observed that it was 25 miles to the finish. Quick as a flash he persuaded Mary to load up the Edwin Starr song on her iPhone. Do you know it? Here’s a few lines:

…. I got a five more miles to go
Now over the hill and just around the bend
Huh although my feet are tired I can’t lose my stride

Well guess what happened? Before I could say “Huck Finn” my legs started twitching and I was up on the picnic table giving it large in full boogie mode. Well, I like to feel that I caught the moment but maybe the smiles and the laughter were just a polite response to yet another of the Captain’s eccentricities. I’m told that there’s a video clip of the performance. I may someday post a link here. Or I may not! (Click here to see the evidence for yourself.)

Anyway it did the trick for me and I completed the last 25 miles. I was really glad to reach the hotel in Kirksville and although this had been a tough day, after a shower and a swim it was also a very satisfying one. I reflected on a job well done and the 148 rollers conquered. Or was it 149?

Posted by Captain Century at 19:00