After yesterday’s ordeal I was feeling more than a little apprehensive about what lay ahead today, as I am sure several other riders were. In the event we were worrying about nothing. A shorter route, sunny and warm but not overly hot air and, joy of joys, virtually no wind. And what wind there was was blowing from behind. We had even been given a start time half-an-hour later than usual – 8:00am which meant that I could complete my pre-ride routine at a much more leisurely pace. Within a few minutes of leaving, our group which today included the Fabs (with Greg) as well as Bruce, Kathy, Mike and Robin, closely shadowed by Dana, was spinning along effortlessly at around 20 mph. The change in our attitudes was palpable. Instead of yesterday’s grimaces and white knuckles there were lots of happy, smiling faces and even a fair bit of happy chatter and laughter. What a difference a day makes. Bliss! 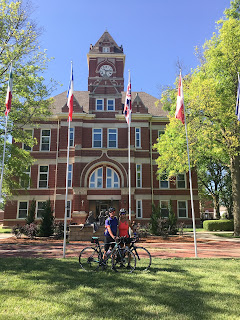 We made such good progress that we reached the first SAG in Lyons, which Bruce told me was pronounced like the animal and not in the French way, in record time. The newest branch of the Crossroads Cycling Pop-up Diner franchise was up and running and as we approached it the CV lunged ahead as it realised that today was pie day – Pumpkin Pie to be exact! Lyons is an attractive small town which has some nice tree-lined streets in the centre providing welcome shade. It is the country seat of Rice County and as we lounged around the SBend toAG munching our pies a fine old building across the street caught my eye. Closer investigation revealed that this was the County Courthouse and the seat of the Honorable Richard E Burgess Jr., Magistrate Judge, Rice County. Seeing this, together with a chance remark from Robin over dinner later in the day, set me off on a train of thought.  How can such a small community justify a courthouse? Even accounting for the scale of the country, McPherson was just 30 miles down the road and Great Bend 30 miles behind us. So I’ve made an entry in my notebook to investigate this further when I am back home. I sense there is a story to be told which I will include in my next book…


The second half of the day’s ride was pretty much like the first. Fast and relaxed. So fast that we arrived in McPherson around noon with time on our hands. As this was a Sunday most places in the older part of the town were closed. During a very brief sortie around the town I was amazed to discover that at one time it boasted an Opera House. The preserved building now operates as film theatre and venue for hire. 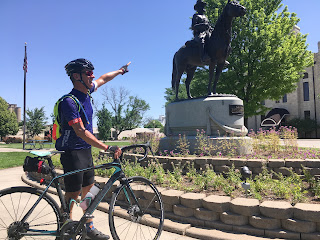 I also spotted another Courthouse and alongside it a statue of Major General James B McPherson, after whom the town is named. McPherson had a distinguished career and served in the Union Army during the Civil War. He lost his life at the Battle of Atlanta after being shot by Confederate soldiers. In a twist of irony, the leader of the Confederate forces here was his former classmate and childhood friend, Lt. General John Bell Hood. With some poignancy on hearing of McPherson’s death, Bell wrote:

“I will record the death of my classmate and boyhood friend, General James B. McPherson, the announcement of which caused me sincere sorrow. Since we had graduated in 1853, and had each been ordered off on duty in different directions, it has not been our fortune to meet. Neither the years nor the difference of sentiment that had led us to range ourselves on opposite sides in the war had lessened my friendship; indeed the attachment formed in early youth was strengthened by my admiration and gratitude for his conduct toward our people in the vicinity of Vicksburg. His considerate and kind treatment of them stood in bright contrast to the course pursued by many Federal officers.”

With most places closed and an early arrival at our hotel we adjourned to Freddy’s Frozen Custard and Steakburgers, a regional fast food outlet, to kill time. The place was absolutely heaving with, judging by their dress, families who had spent the morning at one of the many churches in town. The appearance of four sweaty, lycra-clad cyclists momentarily silenced the place and we were very definitely the centre of attention. With considerable aplomb we marched to the counter, placed our orders and claimed our seats acting throughout as if this was entirely normal behaviour, which it is – for us! Gradually the assembled throng resumed its conversations though we continued to receive receive sideways glances from the patrons throughout our visit. Once we had feasted we returned to the hotel, checked in, showered, changed into our ‘street clothes’ and went in search of a bar to guzzle some pre-dinner beer.

Chatting to Pete over a glass or three I happened to mention the challenge of finding enough sockets to plug my assorted inventory of electrical apparatus in to recharge. This includes the Garmin, two bike lights, a digital camera, iPhone and iPad, electric toothbrush and Shimanono Di2 gears on the bike. If I plug everything in at once, the lights in the room dim noticeably, such is the demand for electricity. A favourite place to find sockets is in the base of the lamp that sits on the nightstand. The problem I often encounter is that I connect up via a US/UK adaptor through a UK plug and a charger which means that depending on the location of the sockets on the lamp there is often not sufficient room to squeeze it in. “Don’t you use the bible?” was Pete’s response. “Use the bible?” said I. “Yes” said Pete, “I extract the bible from the nightstand and shove it under the lamp to raise it up high enough. I’ve even made a little game of it, trying to guess which drawer the bible will be in when I first come into my room.” So dear readers, I end today’s lesson by directing you to Genesis 1:3.

Posted by Captain Century at 17:00