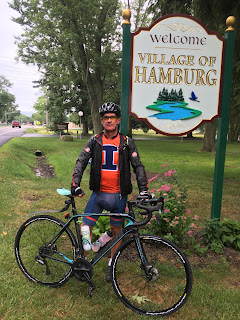 Well here we are, another day nearer the end with a long stage across upstate New York. Now here’s a thing I didn’t know. There’s the town of Hamburg which was established by decree in 1812. One of the earliest recorded events was agreement to place a $5 bounty on wolf hides due to complaints by local people – about the wolves I imagine, not the hides! But in addition to the town there is also a quite separate village of Hamburg which spun off from the town in 1874. That explains the sign I saw on the way out! 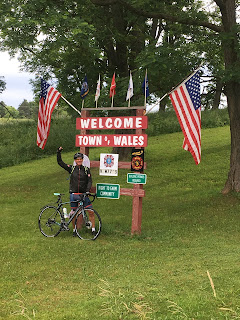 Today was clearly going to be a signs day as I saw references to Warsaw and Lima as well as Wales. Naturally I stopped to get a photograph of the latter. Established in 1818, the town was given its name because the green fields and hills reminded the founders of the land of my fathers. I understand that the townspeople work hard to preserve a small-town, traditionalist atmosphere with much emphasis being placed on family life and small business. It bills itself as “a town of families, friends, farms and so much more!” To celebrate the town’s bicentennial this year, a wide range of events are being staged including walks, sports events, picnics and intriguingly a pie baking contest with the entries being judged in a couple of weeks time.I wonder who will win.

Heading onwards from Wales I found myself riding with Cathy (aka Person Number Three). With the rain of the last few days the road surfaces have collected a lot of debris and unfortunately for Cathy this translated into three punctures in rapid succession. On the second occasion we pulled up on the drive of a local house owner who soon appeared with her dog to see if she could help. In short order we learnt that Kathy was also a cyclist, that her husband races and that her dog was called Thor. As is usually the case on these occasions we had an interesting chat about our tour and, Kathy, if you are reading this please accept our grateful thanks for your assistance. You are another fine example of the kindness of strangers. 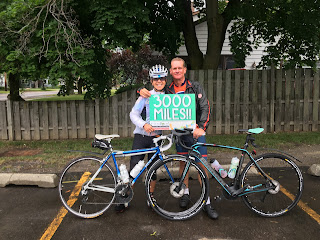 Cathy (the other one) had her third puncture just before the first SAG of the day so we decided to replace the tyre with a new one – no punctures for her thereafter. The first SAG marked another significant milestone in our journey eastwards; we had reached the 3,000-mile point. There are now just 417 miles to go to the Atlantic Ocean. I can’t believe how much has happened in the last six weeks. Cathy and I rode out of the SAG together pretty smartly as she was hoping to link up with some friends who had set out from the second SAG and were riding towards us. Link up we soon did to huge whoops of delight from Cath and her friends. As soon as they had turned around and completed the introductions I managed to bring the party atmosphere to a halt with my own rear wheel puncture. This was only a short-lived distraction though and we were soon underway again. 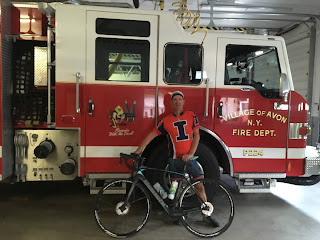 The second SAG was in the town of Avon at the (volunteer) fire station. They have let Crossroads use their restrooms for many years now. Basically, the leave the door unlocked and we just do what we have to do. I had a quick look around the inside of the station and managed to snag a pic of the CV and me propped up against one of the engines. Do you like it?

We headed off on the final leg. Today had the feel of a sluggish ride. I guess that the accumulated mileage is taking its toll – on some more than others. Bruce is wearing compression socks at night and packs his knee with ice as soon as we finish each stage. Pete is maintaining steady progress starting with the early group and keeping to a pace that he can sustain. There is a steely determination building in the group and we are all focussed on getting to the finish – individually and collectively. I have found that a little treat towards the end of the stage provides both the CV and me with a good boost. So let me tell you about today’s “little treat”. 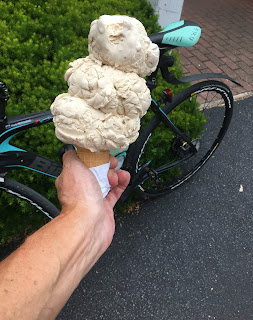 Passing through the town of Bloomfield I spotted an ice cream parlour. The car park was quite full which was a good sign. So I pulled over to investigate – the rest of the group carried on and I said I was happy to make my own way to the finish. Looking inside, it was quickly apparent that I had arrived at ice cream heaven. A delicious selection was available, all home made. So I opted for a small pecan maple variety in a cone. I should have sensed trouble when I was told that we might find a bowl and spoon helpful. ‘Small’ turned out to be three scoops, large scoops by my definition, creating a veritable mountain of ice cream. Taking my spoils outside I found a quiet corner and the CV and I began to tuck in. This was ice cream of the highest order. Proper ice cream; rich and creamy with the sweet tangy taste of maple and the slightly flavour of pecan. I have to say that it was quite possibly better that that Pecan Fudge Pie that I tasted in Somerset (6 June). But I do know someone who would probably beg to differ and assert that the pie was better! Whatever, today the ice cream defeated the CV and me so we decided that discretion was the better part of valour and reluctantly headed off on the final leg of the day.

Riding on our own gave us the chance to up the speed and burn off some extra calories. We were making excellent progress and pace when we had a little mishap. There are three things readers that I dread on tour. Three ways that can force us to abandon. First is getting sick, so we are as scrupulous as we can be about our hygiene, particularly at SAGs when lots of people are handling the same food. I have known riders succumb, leaving them with no choice but to head home. Second, a major mechanical – a bike breaker. And third, serious injury – broken bones, especially collar bones the cyclists Achilles Heel as it were. Well today we had the luckiest of escapes and cheated two of the three threats.

A couple of miles from the finish we were whizzing gently downhill at about 35mph along a long, wide, smooth shoulder. We were so happy that we were about to burst into song. Our reverie was cut short by an almighty bang, total and instant loss of air from the real wheel and the sound and feel of the rim bumping and grinding on the tarmac. But worse than that the CV began to swing from side to side. I spent the next two hundred yards desperately trying to stay upright whilst reducing our speed. The rear brake was largely ineffective due to the speed and the flat tyre. Using the front brake too harshly risked accentuating the swinging into a jackknife with the certain consequence that we would hit the tarmac hard. Eventually we managed to come to a stop and I unclipped and nearly fell over so much were my legs shaking. I heard a voice behind me say:”Buddy are you alright?” or words to that effect. Looking up I could see a policeman walking towards me and behind him was his car with the roofs lights flashing. Once I had collected my wits and we had made our introductions I learnt that he had seen the incident and quick as a flash had acted to slow the following traffic in case I veered out onto the carriageway. He remained with me until I had replaced the tube and temporarily boosted the tyre (there was a hole nearly ¼ of an inch long in it). Then, after shaking my hand and wishing me well on the ride to Boston, he followed me for about half a mile once I got going again. It was a mighty relieved Captain and CV who eventually pulled in to our hotel.

All’s well that end’s well though. I’ve fitted a new rear tyre – and a front one as well. The CV has stopped shaking and we are both ready to go tomorrow. In my experience the best medicine in these situations, apart from a glass of beer, is to get on with it. So that’s precisely what we’re going to do. And besides, tomorrow is a stage that I have been eagerly anticipating. As I hope you will discover.