I’m starting today’s report with some very sad news. One of the tour team, Mike, unfortunately had a serious accident yesterday and was airlifted to hospital. While the full details are still unclear it appears that he collapsed and crashed whilst going downhill resulting in a head injury.  I understand that he is being well-looked after in hospital and that his family are with him. As you can imagine, the mood today was rather subdued. Mike was one of the older riders on the tour and although I hardly knew him I was constantly impressed at his ability to keep going under all circumstances. He came across, to me at least, as quite a private person, comfortable in his own company and happy to ride solo. Whenever I passed him on the road I always said hello and invariably received a nod and a smile back. A couple of days ago he sat with me at breakfast and unusually for him started a conversation by telling me that he had been reading this blog and thought I might be interested in the writings of another cycling tourist in the USA and Europe. I gave him my email address and later that day he sent me a message with some links to the rider concerned. So I am writing today’s report with a heavy heart and dedicating it to Mike. He is with all of us in spirit, and I know that my fellow riders and the tour crew extend their thoughts and good wishes to Mike and his family at this difficult time.

After yesterday’s tough stage on the rollers in the heat and humidity, today was something of a transition stage. By common consensus, and with another century stage tomorrow, we had decided to rein it in a bit and ride easy. The ‘we’ here comprised The Fabs (Pete, Emil and myself) with the addition of a couple guest artistes in the shape of Kathy (aka Person Number Three) who comes from San Francisco, and Bruce who hails from Nashville. We set the tempo and tapped out a good rhythm on the tarmac. At school assembly this morning, Headteacher Paula had flagged up three milestones on the route which I will tell you about presently. 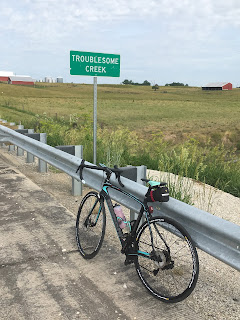 Most of the day was spent on quiet roads, quieter than usual because today was Sunday. Despite our plan to hold back we found ourselves making excellent progress, aided by a light tailwind. Along the way we passed over the intriguingly named Troublesome Creek and I stopped to get the requisite photograph. The scenery for much of today’s stage wasn’t that special – mostly unremarkable rather than unattractive, but certainly lacking yesterday’s splendour. One early highlight was that we were passed by an Amish man driving a horse and cart. We exchanged friendly greetings as we passed by each other. I understand that as we progress eastwards we will see more Amish people and I am really looking forward to this and to seeing their villages and farms. In the era of fast living and high technology, I am keen to observe a little more of their traditionalist approach to life. 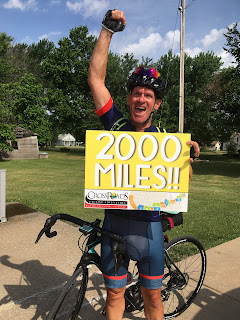 Our first milestone coincided approximately with the SAG. We’ve now completed 2,000 miles on our journey from Los Angeles. Only 1,400 miles to go! So there was a clamour to get the necessary photos for the scrapbook. At one point I am sure I saw Itchytoo holding at least six iPhones to take the necessary pictures. It seems like an eon ago that we left Riverside in California to embark on the tour. So much has happened since we left – lots of scenery, lots of sweat, and lots of satisfaction. For me though, the most precious part of tour are the friendships and the sense of a shared objective, a common purpose, that brings us together, and even, sometimes, a shared struggle to complete each stage. There seems to be a bond developing between us that is going to carry us all the way to Boston, and I hope in a few cases, beyond Boston.

From the SAG we still had another 35 miles to go to reach the stage finish in Quincy. So we clipped in and pedalled out whereupon the skies opened and down came the rain. Big warm droplets of the stuff. Now I guess I was a little premature with yesterday’s boast about no rain but I can say that today’s rain was ‘nice rain’ if there’s such a thing. Unlike Britain where the rain is usually cold, the high temperatures and warm road surfaces meant that, for me at least, it didn’t detract from the ride. If anything it improved it by slightly lowering the humidity a tad. I never thought I would claim that rain could improve a ride! Anyway, after a couple of showers, the second of which we sought shelter from in a handy gas station, the roads quickly dried up and blue skies emerged. Apart from slightly squidgy socks and mud-splattered bikes there were no lasting effects. 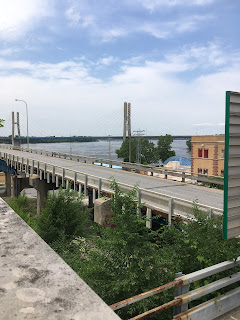 Milestones two and three came upon us in short order. First up, we crossed the mighty Mississippi River. Crossing this marked a critical stage in our journey east. The river, the second longest in the US flows for 2,300 miles from Lake Itasca in northern Minnesota to Gulf of Mexico by New Orleans. The river has played a defining role throughout American history, both as a natural barrier and also as a strategic communications and transportation link. So in addition to completing 2,000 miles today I also felt a strong sense of progress east. Will it be all ‘downhill’ from here? I very much doubt it! 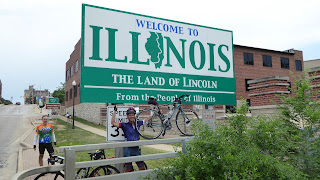 Our third milestone was passing out of Missouri and into Illinois, our eighth state on the tour. As we crossed over, pausing to take a photo of both the State sign and the Quincy city limits sign, we paused to look back at the river. I couldn’t help thinking of Paul Robeson’s rich baritone voice singing ‘Ol Man River’ which contrasts the endless flow of the river with the struggles and hardships of African Americans. Describes by many as one of the most hauntingly beautiful songs of the last century, I paused and gathered my own thoughts and reflections once again. I can’t wait to continue our journey east tomorrow. Feel free to join me for the next instalment in what for me is proving to be a life enriching experience …

Late news: a video has emerged of my antics yesterday. If you really want to see what I got up to then I’ve posted a link at the appropriate point. This may not be the last time I do a tour dance…