Today was another short day and the ride over to Indianapolis was pretty unremarkable. So unremarkable that I Mahdi only taken one photograph until the last leg of the stage. But it was definitely worth the wait. If I tell you that on the first half of the route we passed through endless fields of maize and soya along straight, nondescript roads, you’ll probably get the picture. The tedium was lifted slightly in Jamestown where we spotted a large white statue of a figure striding across the grass. Quick as a flash Pete had us doing a variation of the Madness walk to lighten the mood. And if I’ve lost you here look for Madness (the band) videos on You Tube and work it out for yourself!

We approached the outskirts of Indianapolis on some very busy and very rough roads. This was all rather unpleasant. But with only a few miles to go it all changed. Leaving the main roads we turned on the the White River Trail and it was like crossing over into a new world. Gone were the noisy, exhaust-fume belching lorries passing through an endless series of industrial areas. Now we had entered utopia or so it seemed. 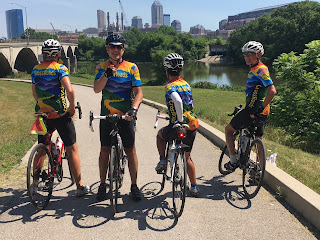 A lovely smooth cycle trail weaved its way through mature trees and woods with glimpses of the White River beyond. In just a few seconds we were in a magical world, quite, lush and teeming with wildlife. The transformation was total and totally unexpected. Although we had been given a heads up at the morning’s Route Rap nothing had prepared me for this experience.

But there was more to come. We burst out of the trees on to a small promontory with the whole of downtown Indianapolis laid in front of us. The modern skyscrapers sitting on the horizon with the river cascading over some rapids in front of us was just magnificent. Although this had been only a short part of the whole stage it easily made up for the underwhelming nature of the previous parts. 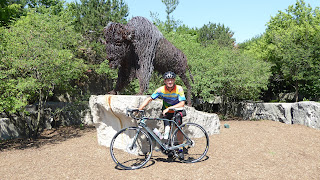 Gradually we got nearer and nearer to the city centre, turning eventually onto a wide car-free bridge to cross the river. Indianapolis. The White River State Park that we had been riding through is one of the jewels in the city’s crown. It is very pedestrian and cycle friendly and, for me a least, quite different to anything I had seen so far on the tour. The range of street art provides a vivid counterpart to some of the city’s buildings, many of which are architectural masterpieces. Although in European terms they are relatively recent constructions, many of the buildings are very traditional in their design with huge columns and pillars enriched with intricate stonework.


The last few miles were so enthralling that I seized an entirely unexpected opportunity to ride it again with one of the tour team. As I rode along I recalled a brief chat earlier that day about Van Morrison and that set me thinking about a couple of his songs. And do you know what? Van the Man has the words that sum up perfectly how I felt about this part of the ride:

As the end of the tour slowly comes on to the horizon I find that increasingly I am taking stock and reflecting on those moments, places and people that I will be holding in my heart. This is very definitely one of them. And readers, I make no apologies for getting all sentimental again.