First up an apology for the break in transmission. Over the past few days there have been some things happening off the bike that I have had, and wanted to prioritise over my writing. So my fingers have strayed from the keyboard. But I am back on the case now readers. I am writing this on our final rest day in Erie, a delightful city on the lakeside. I’m going to play a little game of catch up here and combine the last two days stages into one report. They’re both pretty much all in Ohio so that makes it easier. I hope you don’t feel shortchanged!

Stage 34 was from Wooster to Niles (93 miles – click here for route flyby). Wooster is a lovely city with lots of charm and I enjoyed a delicious dinner at a small restaurant with a special friend the evening before. It was especially nice to eat fresh food which tasted like it had been prepared to order, rather than the more usual manufactured fodder that the chain eateries provide. We rolled out of Wooster at the usual time of 07:30 and gradually headed eastwards on a succession of quiet country roads. The countryside we passed through was beautiful – the further east we go the more lush it seems to get. We crossed over a large lake before entering Berlin (not that one!). The village was founded in 1816 by John Swigert who, not surprisingly, came from the other Berlin. Most of the early inhabitants were from Germany and Switzerland. Today, the village is best known as the largest Amish community in Ohio. 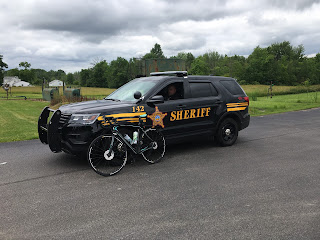 As I left the village I spotted a depot full of yellow school buses so I pulled over to grab a photo. It’s not often that I’ve seen such a big nest of buses! As I crossed the road I could see a Sheriff’s vehicle parked with the deputy inside looking at the passing motorists. So I rode up to him and asked if I could lean the CV on the front of his vehicle for photo. After looking at me incredulously he agreed and within a mere few minutes we were in the full throes of a debate about how American motorists treat cyclists compared to the UK. He had quite a few interesting opinions, and I suspect that on the basis of my observations on UK motorists, may now think that I come from a country of homicidal drivers. “How close do they pass you? Wow!” 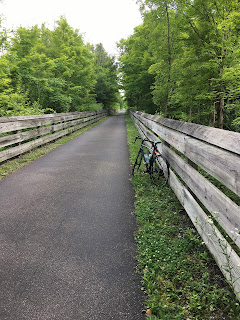 Time was pressing on and the stage finish at Niles beckoned so I had to leave my peacekeeping friend to his peacekeeping duties and resume the ride eastwards. The final part of the ride was a real delight – a dedicated paved cycle route through the woods to the edge of Niles. It was a really blissful experience. So lovely that I actually turned around and rode back a few miles to do it again, using the time to clear my head and float free! I also had a hidden agenda. The extra miles meant that by the time I arrived at the hotel I had managed to notch up my third successive century! Yay.

I awoke the following morning to a leaden grey, heavy sky. Rain was in the air. So on with the swan neck to protect my backside from the spray. The last time I fitted it there was no rain so I was hoping that it would have the same effect today. It didn’t and within just a few miles the heaven’s opened, down came the rain and on went my Idrio jacket (100% breathable, 100% waterproof). Breathability is a major consideration with the humidity we experience. Sadly, the rain stayed with us until virtually the end of the ride so I just got on with it. Tapping the pedals and taping out Stage 35’s  miles, ninety of them. Keeping moving is the best way to keep warm in these conditions. (Click here for route flyby.) Pete had decided to go out with the early group as he fancied a gentler day on the road so this was the first time I have not ridden with him since we met in California on our Hollywood jaunt. Was it something I said? Pete says not. 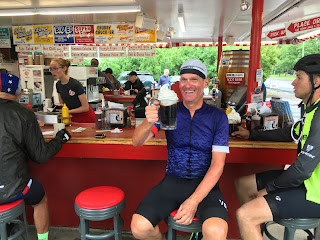 The second SAG today was at the White Turkey Drive-in, an establishment which has achieved legendary status on previous Crossroads tours. Founded in 1952 by Eddie and Marge Tuttle as a place to showcase their farm-raised turkey sandwiches. The restaurant takes its name from the White Holland breed of turkey. The business is still run by the family and their friends. But I had heard of something else that they served which I decided to give a whirl – a root beer float. Under the expert tutelage of Bruce, who I had been riding the rain with, I stirred with my spoon and pushed with my straw and got stuck in. Now I have to say that root beer is an acquired taste and with a little practice it is a taste that I might well acquire – especially when the float is so delicious. As I downed the drink and spooned the ice cream I could see Bruce looking at me out of the corner of his eye and smiling to himself. You may just have started something Sir Bruce!


Although the rain was easing I kept the Idrio on and crossed over into Pennsylvania (state number 10) before rolling into Erie and the prospect of a day off the saddle. I arrived with a dry backside and body (thanks swan neck and Idrio) but as I walked into the foyer of the hotel I could hear my feet squelching. Ah well, everyone can’t be perfect I suppose. Erie has the feel of a really nice place and the hotel is situated right on the lakeshore. An ideal place to have a proper rest and to recharge my batteries. Especially as the last few days have been both tumultuous and an emotional roller coaster. But that’s a story for another time!

Posted by Captain Century at 15:30