Today BBC and the Euros reformed. Pete, who has been ‘resting’ by setting off with the earlier group (they’re not slower, honestly), applied for re-instatement. So we held a short meeting on the start line and voted (4-1; Bruce how could you!) to let him re-join us. I have to say that I have been missing both his company and his Scottish wit on the road these past few days. Since our first ride to the Hollywood Hills before the tour, started we have travelled a long road together and got to know each other really well. As the only two Brits on the tour we have formed an alliance and have spent a lot of time together – on and off the road. So I was delighted to spend a large part of today riding alongside him and enjoying his company. 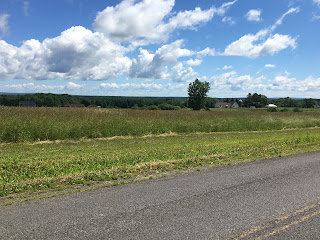 Today was much like yesterday, only better. More of the delightful upstate New York countryside on smooth, largely traffic free county roads. To make the ride even better, the sun was shining and my rain jacket was firmly packed away. Our route has been following the Erie Canal which runs from Buffalo on Lake Erie to Albany on the Hudson River. When construction was completed in 1825 it was the second longest canal (363 miles) in the world. Today it extends for 524 miles. It has played a major role in the commercial activities and economy of the USA. Although a small number of commercial vessels still use it, now it is primarily a recreational resource and has been designated as. National Heritage Corridor. Many of the towpaths running alongside it have been converted in to cycle routes, mostly gravel so we have to stay off them. The great thing about following a canal is that it means gradients are likely to be pretty gentle, which at this stage of the tour is no bad thing. 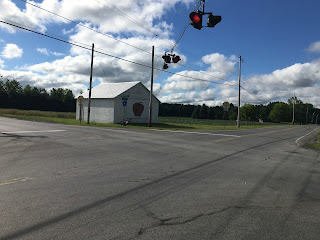 As we rode along on the first part of the stage to the SAG I spent a lot of time looking at and trying to understand the countryside we were passing through. There are lots of trees, woods and forests which gave it a very enclosed feeling. From time to time, where the tree cover had been removed, great sweeping views opened up particularly northwards where I could see rolling hills in the distance. The houses here are a constant source of fascination for me. They come in all shapes and sizes and are mostly constructed from wooden boards. No two houses are the same; each has its own distinctive character. The lots around the houses are usually grassed though not normally on the same scale as I saw in Ohio. The most striking feature is that many, if not most properties have a slightly scruffy and disorderly feel to them which, in my opinion actually enriches and enhances their character. The whole atmosphere of the area is slightly sleepy and laid back. 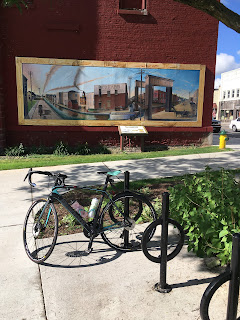 Interspersed between the house lots are some delightful villages. We stopped in once such village, Canastota which is alongside the canal. A couple of the bridges and walls have some delightful murals celebrating the canal’s heritage and history. There is also a museum dedicated to the same subject. The name is derived from the Iroquois language (Kristen Stota meaning ‘cluster of pines near still waters’). Onion growing has been an important part of the village’s economy. I was surprised to see a sign to the International Boxing Hall of Fame. Two world champions (Carmen Basilio (Welterweight and Middleweight; he beat Sugar Ray Robinson to take the Middleweight title) and Billy Backus (Welterweight) are from here. Just another in a long list of unexpected discoveries that riding makes possible and makes it so rewarding. 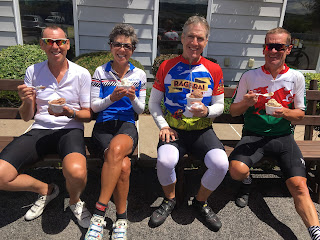 With a relatively short stage, fast roads and a tailwind we made excellent time and were in danger of completing the stage before noon. So to ease things a tad when we spotted Dave’s Diner we pulled over and had some fantastic ice-cream. Proper ice cream! The CV and I plumped for a serving of Sea Salt Caramel in a cup. Recognising the risks of overindulgence from our last feast we opted for the small portion. We both agreed that it was more than sufficient.

Despite this we arrived in Herkimer much earlier than normal. Our hotel (motel) tonight is, I have to say, underwhelming and at the opposite end of the spectrum from the comparative luxury of the Hampton Inn which we left a little over six hours ago. Such is life. Every cloud has a silver lining though and there is one piece of excellent news to report. Cathy (aka Person Number Three), Navi, Pete and I went for a stroll into the town and discovered an excellent little restaurant. I had a wonderful Strawberry and Spinach Salad with nuts, berries and feta cheese. Possibly the best lunch I have enjoyed on the tour to date.