After several stages of comparatively flat riding I was looking forward to today’s stage which promised some proper hill climbing. At 34 miles the route notes commented: “Begin 6.3 mile climb; last 3.5 steeper.” So I was quite excited at the prospect, as was the CV. 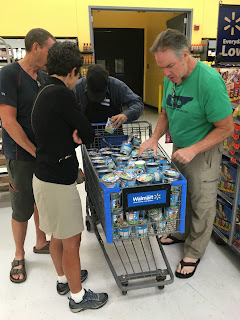 Our morning route RAPs have become quite comical. Headteacher Paula is struggling to manage the class as end of term fever is setting in. Let me give you an example. As we were about to receive the day’s briefing we (BBCX and the Euros) were looking at a video of a previous night’s antics. In a nutshell we had set off to the nearest Walmart in search of some of Ben and Jerry’s finest. One of the BBC’s, Bruce, has been having some knee issues so to help him out we stuck him in a shopping cart and rolled him across the very large car park. As you can imagine, this caused much mirth and merriment. Anyway when we arrived at the store we discovered that the cupboard was bare – no Ben and Jerry’s. Zippo! Quick as flash Cathy (aka Person Number Three) pounced on an unsuspecting Walmart person demanding to know the whereabouts of our ice cream. Well, to cut to the chase, said Walmart person disappeared out back and reappeared with a shopping cart full of every variety known to the human race and, I suspect a few that were not. Result – we able to make our choice and order was restored. Getting back to the point, our attempt to relive and celebrate the experience was received with some scepticism by the Headteacher who, I am sure, would rather have delivered her briefing and got shot of us onto the road. And let me add, no shopping carts were injured in the course of this merriment. 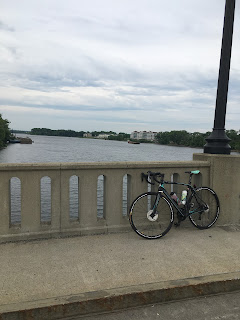 We left Albany and crossed over Hudson River before immediately heading upwards. Each day two groups set off 30 minutes apart. This helps manage the flow of riders through SAGs and helps with other logistical aspects of each stage. Today however the early group arrived at an impassible road closure, a bridge that was being repaired, and had to double back. Consequently they then met the later group (us) coming up the road so we were now all riding as one. With the prospect of being the leader on the road for once, I wound it up and set off on a little break of my own. 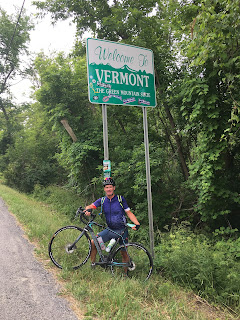 Capitalising on my lead I opted for a short pause at the SAG before continuing on the day’s climb. At the start of the climb I crossed the state line into Vermont (state number 13; just one - Massachusetts left now). I’ve been told that Vermont is an exceptionally pretty state so I was looking forward to seeing it. (For the record what I have seen is delightful.) Once over the state line the climb began. Let me just say that it was a real delight. Longish, gentle gradients (always less than 10%), a broad smooth shoulder to ride on and superb views to the densely forested hills I was riding through. So I got settled in, dropped onto the granny ring and spun my way upwards, tapping out a nice easy rhythm. What a pleasure, what bliss. Especially as it wasn’t too hot either. As I climbed steadily upwards I found myself thinking just how lucky and happy I am now. Today was one of those special riding days when my head and my heart were soaring free. 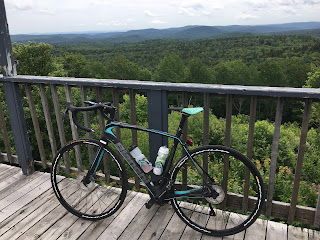 Cresting the summit of the Green Mountain I then enjoyed a long, fast descent which seemed to go on for ever. Some roadworks meant that I had to check my speed a couple of times so I didn’t get above 40mph. Without the roadworks I am sure I could easily have topped 50 mph. But this wasn’t the end. Another lesser climb, Hogback Mountain was waiting as a sort of encore for the day. The long descent was pretty good too, marred only by the rough surface which meant I had to pay close attention and pick my lines carefully. I was pleased also that I have left behind any lingering fears from the blowout incident.

Eventually I arrived at Brattleboro which I had been told was a delightful place and I wasn’t disappointed. I even managed to find the bike shop to buy a new rear flashing light as my old one seems to have packed up. I spent a very pleasant quarter of an hour chatting to one of the owners, Barbara Walsh about the tour and cycling in Vermont. What she shared with me has left me feeling that I must come back and spend more time here. Indeed I already have the germ of an idea developing so who knows.