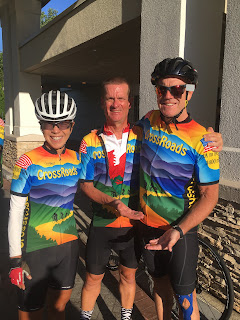 Before starting today’s stage some long overdue and important business had to be concluded. Back on the 2nd of June I won a bet with Bruce by not telling the story of Pawnee Rock. So today Bruce paid his dues and I got my £1 and €1. Cathy (aka Person Number Three) acted as the official witness.Well actually I got £2 which is okay Bruce as we’re apparently leaving the EU so the €1 would probably not be much use to me. Now readers, you might still be wondering what’s the story of Pawnee Rock. Well as I’ve trousered my winnings I’m now going to tell you.

Pawnee Rock is a famous landmark on the historic Santa Fe trail. Strategically it was an important viewpoint where Indian tribes used it to pinpoint approaching buffalo herds and wagon trains. For some it was regarded as the most dangerous place on the Santa Fe trail. For others it was a waypoint denoting that about half of the journey westwards was complete. Over the years many of the people passing by carved their names into the soft rock. Sadly by the 1870s much of the rock had been removed to be used as building stone. Since 1970 it has been officially protected and listed in the National Register of Historic Places. So there you are. That’s what I didn’t tell you about before in order to win the bet!


Today’s stage was effectively a parade lap to the beach. Just a few short miles to mark the crossing of a continent. Just as we did on the first day of the tour in El Segundo, we gathered in front of the hotel in Burlington and set off in groups of three. Pete, Emil and I, previously part of The Fabs and now the Euros, lined up alongside each other and then off we went. With such a lot that has happened I was feeling very emotional. The euphoria of actually completing the ride – 3,417 Miles and achieving EFI Status (Every Foot and Inch). A realisation that I would almost certainly never ride with this whole group of wonderful people again but a hope that some of us may cross paths again one day. And some sadness too that it was not possible for someone who has become very close to me to be there as I crossed the finishing line.

We  rode south east from Burlington gradually crossing Boston’s suburbs before we all gathered together again to form up for the final procession to Revere Beach. We were formed into a line in pairs and I was pleased and proud to be standing next to Pete. We both recalled our first ever ride together, to the Hollywood Hills, before the tour started. We have travelled so much ground together since, both on the tarmac and off it, and we have become good friends. I look forward to the day we rode together again – how about something around the Trossachs or the Borders, Pete?

Taking advantage of the brief halt, I asked Pete to hold my bike and went to the front of the line and worked my way back saying ‘goodbye’ to each of the riders individually. People, kindred spirits that  I have ridden with and got to know well and others who I now wished I knew a bit better. Such is life on a Tour. From every one of my fellow riders I have drawn tremendous inspiration. Each of us, experienced cyclists or not, have shared a unique experience and overcome so many obstacles and challenges that threatened our achievements. I will treasure those memories forever. A good route makes a good ride or tour. And great tours are made by great people. This has been one of the greatest tour teams I have ever ridden with. 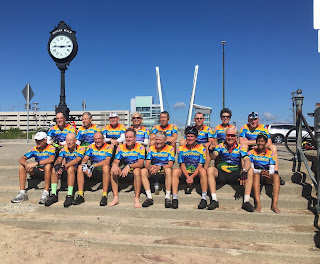 We were led in convoy, with a police escort, along the final four miles to Revere Beach. We must have looked a splendid sight as so many passers by stopped to gaze at us.We even received some cheers from the sidewalk and several car horn toots. Then suddenly we turned the last corner and in front of us was the Atlantic Ocean, journey’s end. The seafront was lined with people, families and friends who had come to cheer and congratulate their riders. There was quite a party atmosphere. Then everyone gathered round as we dipped our wheels in the ocean and posed for a last group  photograph.

I have a lot of memories from the tour and it is going to take me a long time to process and understand them. I need to organise my photographs and other records as one of the downsides of a long tour like this is that places and events blur into each other. So when, in a few days or weeks time I have made sense of all this I plan to write one final reflection on the tour. Watch this space … 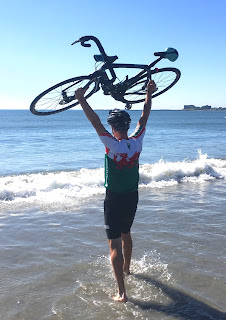 I had one final act to perform. As we left Manhattan Beach on 13 May I picked up a small peddle from the shore. It has been in the back pocket of my jersey every day since. It has been a constant companion for me and CV throughout the tour. Each morning it has sat in front of us at our one-to-one meetings in our hotel room as a daily focus for collecting our thoughts and getting ready to ride. I spent a couple of minutes on the beach silently reflecting on what has happened to us, me and CV,  over the last seven weeks and then hurled the pebble as far as I could into into the Atlantic Ocean. We were both happy to see it fly and sad to let it go. We have travelled a long way together. We have travelled 3,417 miles!