The cue sheet for today showed that the stage was 97 Miles. Close, temptingly close to a century. Regular readers will know that the Captain doesn’t consider 99.9 miles to be a century – it has to be 100. So it was game on for a few extra miles at the end of the stage to rack up a proper century. 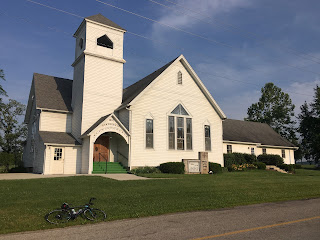 The stage was another full day’s riding in Ohio. As we progress eastwards the countryside is getting more and more lush. Lots of greenery - grass, crops, trees, hedges, woods and forests. Delightful roads meandering through valleys with streams and rivers, some full of fish, gurgling and burbling their way along. Lots of lovely properties too, large and small, mostly set back from the roads and almost invariably well maintained. The homes of proud folk. And lots of architecturally simple, plain white churches. It was totally enjoyable riding, often freewheeling along as I took in everything around me. 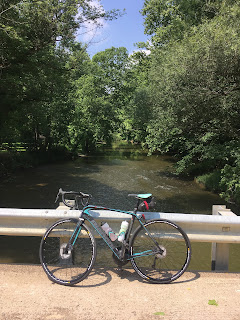 I had one unexpected and very pleasant encounter. I had stopped at a bridge to get a picture of the river we had been following for several miles and while looking around a woman, in her ate thirties I guessed slowed and asked me if everything was ok (I was riding solo at the time). So I replied I the affirmative and added that I was just admiring the view. Picking up on my accent she got out of the car, asked if I needed any cold water and came over for a goss  – the usual stuff, where I had come from, where I was going and so forth. As we were chatting there was a cry from the back of her car to which see said “Oh that’s just one of my kids waking up.” Sensing that our conversation was coming to an end I mentioned this blog site to which she produced a pen and paper and got me to write down the URL. So dear lady, if you are reading this then my thanks for both your concern and your interest. One again I am struck by the kindness of strangers.

Today, the character of the route changed towards the back end. A complete transformation from gentle undulations to rollers. And some quite brutal rollers at that. Around about the 70-mile mark we faced a succession of climbs, some touching 12%, which had me changing down on to the granny ring which I haven’t needed to use for some time. With the temperature and humidity rising sharply what had seemed like an easy ride turned into something much more challenging. Now it was almost a case of survival. I could feel the seemingly never ending succession of rollers leaching away the strength from my legs. The downhill sections provided opportunities to recover but never quite enough to before the road turned upwards again. 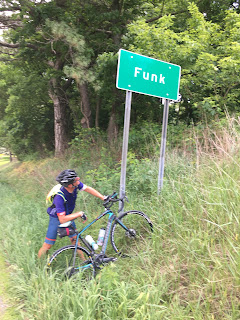 I did have one moment of light relief as I arrived at the village of Funk. Yes, that’s right, there is actually a village called ‘Funk’. By co-incidence as I taking the requisite photo Mary and Navi in one of the support vehicles pulled up and quick as a flash Navi worked her magic and a burrs then of James Brown emerged from the car’s speakers. Well, I didn’t need a second call.  The Lewis got moving, the torso got shimmying and I gave it my all to the beat. Fortunately this time no photos or videos exist! So will have to take it from me – I was funky in Funk!


The last part of the stage into Wooster was relatively straightforward. I was able to top up my water bottles to ensure I strayed hydrated – the main challenge for the day and Pete and I eased into town via a rather fine bike shop (didn’t buy anything). Then with a couple of circuits if the town to put on the requisite miles for the century we rolled up at our hotel just as the clouds burst – literally. Two centuries in two days! Wonderful.