After yesterday’s excitement the CV and I made a pact at our morning team talk. Throttle back and take it a bit easier. Today’s stage was one that I had been eagerly anticipating for some time because of a connection to another of my passions. More in a moment. First let me set the scene and deal with the essentials. With low cloud, mist and fog floating around and a cooler temperature the ride started this morning with what was uncannily like a proper autumnal feel to it. In June? That can’t be right. Anyway it was one of those rides inviting the classic “Do I” or “Don’t I” question. I’m referring to the donning of my rain jacket. I did and then I didn’t and then I did again and then I didn’t again. OK, you’ve got it? I’ll shut up about it. 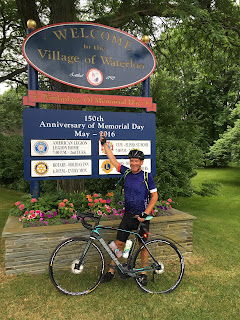 Within five miles guess what happened? A puncture for Emil so just as we had warmed up we had to stop and cool down. We both hoped that this wasn’t the start of “one of those days…” It was’t as it turned out. By now, fixing punctures is something we take in our stride. After all we’ve had lots of practice. So we were soon up the road and setting a good pace with the help of a modest tailwind. With the fog reducing visibility somewhat it was a day for lights – front and rear. As we ate up the miles we passed through Geneva and then Waterloo. Waterloo was designated as the birthplace of Memorial Day by President Lyndon B Johnson on 26 May 1966. This year it was celebrated on 28 May when we rode from Las Vegas to Tucumcari on Stage 14. That seems like an eon ago now. 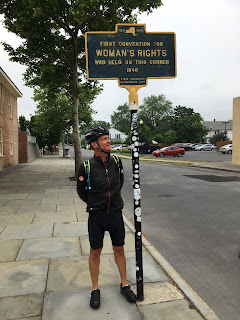 Leaving Waterloo behind we reached Seneca Falls where I discovered that the first convention on Woman’s Rights was held over two days in 1848 – there’s a plaque marking the location. Then convention was a landmark event marking the start of a movement, that grew relentlessly leading in time to the 19th Amendment to the US Constitution which was passed into law in 1920 giving women the right to vote throughout the USA. As we rode through the town I found myself wondering about the pace of change and I was more than a little surprised to subsequently discover that it took over 60 years for all of the remaining states to ratify it, Mississippi being the last to do so in 1984. Of course, the right to vote is only a part of the story and I have plenty of friends who rightly feel that there is still a way to go. Discovering these little nuggets of history has been one of the most enjoyable aspects of this tour. 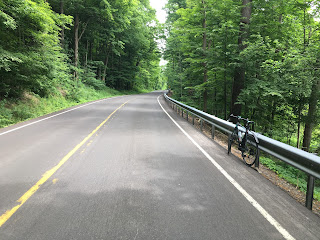 Now earlier on I hinted at my eager anticipation for today’s stage. So let me unpack this a bit – hang on in there as it might feel a bit left field. Long standing readers will know that I love Bob Dylan. And once again let me emphasise that it a love of his writing, his lyrics and not any other sort of love. I first tuned into His Bobness through the Basement Tapes and related stuff from The Band (Music From Big Pink). What did it for me was their drawing on the countryside and lifestyle of upstate New York to create some fabulous music. Now I appreciate that where I am today isn’t anywhere near Woodstock or Saugerties but the gentle lifestyles amongst the woods and forests that in part inspired their music has been with me for a long time. Earlier this year I read Robbie Robertson’s excellent autobiography, Testimony, which rekindled my interest. So I was keen today to look much more closely at the character and atmosphere of this part of New York State and to try and find some inspiration of my own. And yes, I did find it. 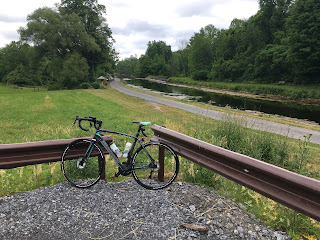 Long leafy lanes, gently rolling hills, canals, lovely wooden houses – each individually distinctive providing a rich tapestry and backdrop for my ride. A great ride! So rich that at least twice I failed to notice the Garmin telling me to make a turn. This was a very pastoral landscape interspersed with some lovely towns and villages and its was easy, for me at least, to understand how environments like this can fuel such creativity. It’s helped me to make sense of some of the things I want to write more about when I tell the full story of this tour. But in the meantime I have made a note to return, perhaps linked to another goal of riding in New England. What I can say for sure is that as I emerged from the woods approaching Syracuse I felt quite rejuvenated. I even had a little sing song of my own – a quick blast of ‘This Wheel’s on Fire’. (Look it up if you want to know more.) But in the light of yesterday’s excitement I shut up pretty quickly – this wheel is definitely not on fire!

Posted by Captain Century at 16:30