Here’s the story of today’s ride in 65 words. We left McPherson and turned right and then immediately turned right again. Greg got on the front and we went very fast. After 22 miles we turned left and we went very, very fast. We stopped at the SAG in Durham and then started again. Then we went even faster than before. After 61 miles and 3 hours we arrived in Abilene and we stopped!

That pretty much sums up this morning’s riding. With flat, fast roads, a tail wind and excellent co-operative riding, sharing out the work between us, we made excellent progress. In a few places we were moving effortlessly at around 30mph.There was the hint of rain in the air (it didn’t happen) which encouraged us to keep pushing on. But that’s not the end of the story, Far from it. One of the things that keeps me going is that I never know what I’m going to come across. Some days it’s the countryside and the landscape. On other days it might be the people that I encounter. Or perhaps, a piece of history - one of those historical markers. Today it was food. So readers, prepare your taste buds and whet your appetites. 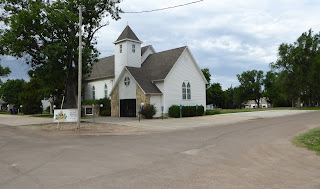 Durham, where we had our SAG was an interesting, even quaint place and I had a very brief look around. Although in the 2010 census it had a population of only 112 people it is nevertheless classed as a city having been incorporated in 1906. The city takes its name from Durham cattle, a shorthorn breed, which originated in the north-east of England. In addition to the Post Office and a rather fine looking Baptist Church one of the main attractions here is the Main Street Café which has been providing “Good Ole Country Cooking” since 1995. The Cafe developed as a result of Wendell Wedel, the owner, who at the time was a welder, making an iron griddle to produce 600 hamburgers for a church auction. Over time this led on to the development of a sausage-making enterprise, building on the work of his father who was a butcher. From there it was a relatively short step into starting up the café which is now known regionally and even nationally for the quality of its fare. The business has gone from strength to strength and its Friday night buffets are especially popular. Scratch the surface of an apparently sleepy town and it’s surprising what you can find underneath. 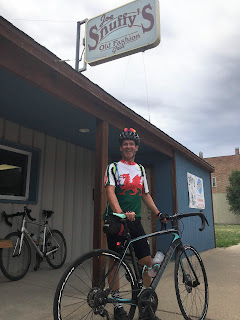 While on this culinary theme I can tell you that we ended the ride in Abilene at the wonderfully named Joe Snuffy’s old Fashioned Grill. And as it was lunch-time I had breakfast – eggs (over easy of course), bacon, sausage (Wendell’s?), wheat toast and lashings of hot, flavoursome coffee. The origin of the name is quite amusing. The owner Marty’s Dad had the nickname ‘Snuffy’ after spending the change from a snuff buying errand on candy. Marty’s Dad got a spanking for his efforts and the nickname ‘Snuffy’ stayed with him thereafter. During his time in the army, Marty himself became known as Private Joe. So when he left to open the Grill, Marty and his wife Anja decided to call it Joe Snuffy’s. If you happen to be passing by don’t hesitate to drop in. If the welcome we received is anything to go by you will not be disappointed. Just remember that it’s closed on Tuesday’s and Sunday’s.

Abilene is most famous as the place where Dwight Eisenhower, General and then President, lived from the age of two and which he considered as his home. His life is commemorated in the Presidential Library and Museum which is one of the main attractions in the town. I hope to have a peek at it tomorrow and possibly also at the nearby Greyhound Hall of Fame. I might even tell you about what I find out…


And thanks too to the person who reminded me of the George Hamilton IV song about Abilene. Click here readers and you can enjoy it too

Posted by Captain Century at 21:00