Yesterday was a rest day and I had a thoroughly enjoyable and rather unexpected day exploring Champaign. I had no expectations, indeed before arriving I hadn’t given Champaign a second thought. I spent most of the day with Pete in the University District. This was a delightful campus with nicely landscaped grounds, some outstanding architecture and some lovely art installations. The highlight for me was our visit to the Krannert Art Museum which took a bit of finding but was well worth the effort.

There was a fabulous exhibition of postwar (1945-55) print making and I spotted an amazing collation of photographs of Manhattan Beach in Los Angeles. This evoked some powerful memories of my rides before the tour started and also of our wheel dipping ceremony on Stage 1. It is incredible how far we have come since then and how much has changed along the way – at so many different levels. Rather stupidly I didn’t make any notes about the collation so I have contacted the Museum to see if they can help me. There is a story to be told here and I would like to tell it when I write my book of the tour.

There is one other exhibition that I really have too tell you a bit about. It was by Basel Abbas and Ruanne Abou-Rahme and in two parts. Firstly a video and sound installation following a group of young people walking through a destroyed village in Palestine and second a study, a sort of catalogue I suppose, covering the prehistoric past and digital future interpretations of Palestine and the West Bank from a unique perspective. Let me just say that I was really challenged, in a good way, by what a I saw and heard. Some of the short writings and poems that were dotted around the installation brought big lumps to my throat. Such power and emotion in the simplicity of the words. This is one of the greatest pleasures of a rest day for me. I never quite know what I am going to stumble across. I am usually quite content to explore and discover in a random or spontaneous way as opposed to having a target or a goal to visit a specific place and tick it off a list.

Champaign struck me as a really nice place. Such a contrast to the concrete installations that the elves construct for us each day. I even spotted a couple of pavement bistros and a trattoria and was disappointed not to have had the time to enjoy them with a new friend or two. Being able to do this would have made the day a proper rest day. Plus ça change

So there you have it readers. A glimpse into a rest day on tour. Much needed and, in some respects, all over too soon. Today we were back on the road. And back with a vengeance! Our little group seems to have evolved into the BBC and the Euros. The BBC are Barry, Bruce and Cathy. The Euros are Emil, Pete and me. We’ve been riding together a lot over the last few days, although once we reach the first SAG Barry, who prefers not to linger, usually heads off on his own. The rest of us like a rather more leisurely halt. 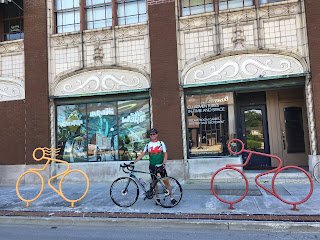 Soon after we rolled out of the hotel Cathy and I stopped to photograph some cycling street art followed by a comfort stop (thanks Starbucks). The rest of the group carried on riding and Cathy and I then engaged in a spot of high speed catch up. Over the next 25 miles, and with a light headwind, we rode hard and fast, going full gas, in an effort to close the gap. We had no idea how big the gap was. We could only guess based on the assumption that the group was maintaining a constant speed and we were riding 3-4mph faster. This was hard work, very hard, yet also satisfying. (You’ll need to do it to understand.) I led and Kathy pushed me every mile of the way. The further and harder we went I could see my heart rate rising to a level where I eventually had to back off for fear of popping a rivet or three. And for my cycling readers, yes, I was very definitely “on the rivet” as they say. Also, as the miles rolled by I could feel the lactate level rising in my legs and started to wonder how long I could sustain this momentum. It’s been several years since I’ve sustained such a high output, in a two-up on the road for so long. Maintaining this level of performance in a bunch is an entirely different, and much easier proposition.

Eventually, with a long straight ahead of us I thought I could see a red flashing light up the road. Resisting the temptation to raise the pace still further, if that were even possible, and risk blowing up, we gradually closed the gap inch by inch, foot by foot over the next couple of miles. Slowly and surely we pulled them back. With about 400 yards left and with a shout of “Let’s go” we stamped on the pedals, Cathy came round me and somehow we found an extra 2-3 mph to finally make the catch. Looking at my Strava record I can see that we started chasing at 4.6 miles on the stage and made the catch at 29.2 miles after 1 hr 28 mins. So having joined back on we felt quite entitled to sit on the back and recover. What fun. Hard work but very satisfying too. I should add that when we reached the SAG my legs asked me ‘What just happened?” and once I could stand up properly, I had to engage in a spot of leg stretching to untangle my muscles. For the record, the CV just purred throughout.

After the ‘excitement’ of the first leg we stuck closely together, each of us sharing a little smile from time to time. Shortly after the SAG we crossed the state line into Indiana – the Crossroads of America - stopping in Veedersburg for a welcome drink which was livened up by the attentions of a couple of passing ladies. I am not going to say any more (what goes on tour, stays on tour). But suffice it to say that this wasn’t the only encounter we had with them today! We also experienced a spot of dangerous driving which Cathy phoned in to the police. We had noticed the driver a few miles earlier as he’d been pulled over for some violation as we passed by. The final leg to Crawfordsville passed without incident and it was one weary Captain who finally collapsed onto the armchair in his hotel room. But one happy Captain too.