Dateline: Monday 11 June; Destination: Springfield, Illinois; Distance 105 miles. Today marked the fifth century stage of the tour so far and the rumours were that it might be quite tough. In the event it was demanding, but in the Captain’s humble opinion, not too tough. As we rolled out of Quincy the omens were uncertain. I spotted a radio mast which disappeared into the low grey clouds that swirled around angrily above us. Rain seemed to be in the air (it stayed dry throughout). We reprised yesterday’s cast of riders – The Fabs plus guests artistes. Looking ahead I could see that Person Number Three (Kathy) had fitted a rear mudguard so I wondered if I had made a mistake by sending my Swan Neck (another type of rain protector) ahead in the van.

Before setting off I had convened a meeting with myself and decided that today was going to be known as ‘Laughter Monday’. This seems to have been a long week of riding, distances and events, with a lot going down, so spirits in the peloton are flagging somewhat. I felt it’s was time to lift the mood. To liven up the proceedings, or so I thought, I had bought an air horn during yesterday’s Walmart excursion. I’m not sure if using it actually turned out to be a funny as I had hoped – possibly a case of overkill. Anyway, the laughter started off in fine fettle when we persuaded Itchytoo to tell one of the faster riders, Barry, that we had already left and he was the last man standing. We were actually standing round the corner laughing as Barry clipped in and pedalled away. He did see the funny side though and stayed with us until the first SAG. 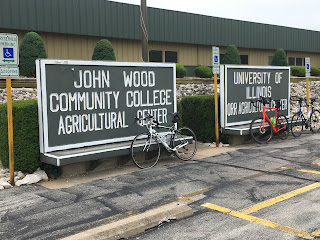 Most of today’s ride was on State Route 104E, which had a good surface enabling us to roll along easily. As we were now in Illinois we were surrounded by cornfields (maize) which stretched away for miles on either side of the road. I am told that this is going to be a common sight for the next several days. The first SAG came up pretty quickly and we pulled over the St John Wood Community College where the latest branch of the Crossroads Cycling Pop-up Franchise had established itself. The usual fare was on offer, supplemented today by a selection of those rather tasty doughnuts that the CV had enjoyed a while back. 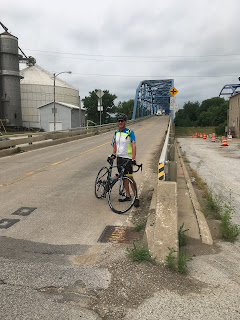 Once we were refreshed we set off again bound for the bridge over the Illinois River. The route notes had warned us that there was no shoulder on the bridge so I suspected that I wouldn’t be able to get a photo as I crossed it. In the event may luck was in because the traffic was reduced to single file while some road repairs were being carried out. So I timed my crossing to the minute and was able to park the CV and snatch a pic before the following traffic caught up with me.

As I descended I could see Mike R in front of me (he had overtaken whole I wears taking my photo). While watching him I noticed something fall out of his jersey pocket and then realised it was his camera. Thanks to a short indentation in the bridge wall I was able to pull over, prop the CV out of the way and then wait safely until the traffic had passed. Carefully choosing my moment and mimicking the Froomedog’s run on last year’s Ventoux Stage of the Tour de France, I ran backup the bridge to pick up what I saw was Mike’s camera. Then, in double quick time, I legged it back to the CV just getting out of the way of the traffic before it swept past me. Sadly the camera had been crushed by a lorry but I think the memory card has survived so hopefully Mike will be able to retrieve his photos. 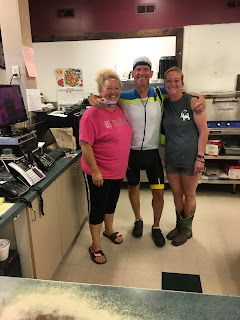 After the excitement of my little spot of running I had a fairly hard chase to catch up with the group. It took me about five miles of fast, hard pedalling to make the catch which I did thanks to temporary traffic lights at some roadworks. Then it was a relatively easy ride to Jacksonville and the second SAG where sweet, cool watermelon was laid on to revive us. We then continued to head east through yet more cornfields before stopping in the intriguingly named New Berlin for some chocolate milk to boost our energy levels. The village was founded in 1865, not surprisingly by a group of German immigrants. Like many villages we have stopped in, the people here were incredibly friendly. There was a group of elderly men who took an immediate interest in what we were doing and quizzed us about the route, today and over the whole tour, as well as our motivations for riding it. IN the space of only a few short minutes we were made to feel very welcome and valued. Bridget and her friend (whose name I didn’t get) who were running the store/gas station also took a keen interest in us and wished us well on the rest of our ride to Springfield. Time and time again I have been amazed at our friendly and sincere are the people who we meet en route. It really does add an extra level of enjoyment to our riding.


The final leg to Springfield passed without incident. Springfield is the state capital of Illinois and boasts a number of claims to fame. Abraham Lincoln lived here from 1837 to 1861, when he practiced law, before becoming President. His Presidential library and his tomb are here. The city also played an important role during the Civil War and the first recorded death, Colonel Elmer E Ellsworth, was a Springfield resident.

More recently Springfield, Illinois is also reputed to be one of the settings for The Simpsons. However, a cursory browse on the Interweb suggests, to me at least, this this might not be quite as clear cut as it seems. Indeed, the programme’s creator Matt Groening, muddies the waters with his comments being widely interpreted and, I suspect, misinterpreted. Well, whatever the reality, there seems to be no shortage of entertainment in reading the various theories, and maybe even some conspiracies.