Unfortunately today’s stage didn’t quite live up to my expectations. Having enjoyed some outstanding riding on quiet minor roads yesterday I was hoping for more of the same today. Instead we found ourselves on some bigger roads with shoulders and rather more traffic, including a few drivers who were up there with the worst on the tour so far – honking their horns  and passing us with the minimum distance. We also had a bit of cloud cover, a lightish headwind and the humidity wasn’t quite as fierce as yesterday. For me the best few bits of the stage were the first few miles and the last few miles. In between, well Pete summed it up nicely: “There’s not a lot to photograph!” 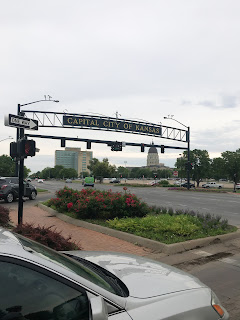 Our route from Topeka was quite interesting. Basically we left hotel kit land in the capable hands off the elves and rode into and then across the heart of the city along some lovely leafy roads and past a nice assortment of residential architecture. The roads were quite busy until we reached the centre of the city when we started riding against the flow of traffic i.e. people going to work. As we arrived in Topeka yesterday, Pete and I had been on the lookout of for our customary photo stop with the city limits sign but didn’t see one. So, I was delighted when paused at a traffic light, to feel a nudge from the CV who nodded towards a rather fine sign straddling the road. The lights were red so I was able to grab a shot for the collection. Pete’s already cheated and downloaded one from the Interweb!

We carried on across Topeka and through the suburbs until we reached State Route 4 which we then rode along for the next 30 miles, passing through the first SAG along the way. I had a spot of fun before this as I pulled over for a brief goss with Robin and Mary who were on support duties today, leaving Pete and Emil to head off up a gentle climb and over the horizon. I then set off in pursuit and once I had reached the top of the incline I got on to the drop bars, wound it up through the gears and went full gas for about 3 miles, eventually catching Pete and Emil shortly before the SAG. Then another 25 miles took us to the next SAG and a cooing milkshake at a Dairy Queen. 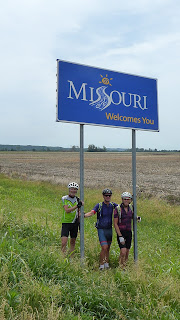 From there it was a short hop, skip and a jump to Atchison and the muddy Missouri River to say ‘Goodbye Kansas’ which has been our home over the last 6days. A couple of signs caught my eye. The bridge across the Missouri was named after Amelia Earhart, the aviator, who I subsequently discovered was born in Atchison in 1897. The house she was born in was built in 1861 in a Gothic Revival style (work that one out for yourself) and is now preserved as a historic building with a museum.

The other sign that caught my eye was a reference to Lewis and Clark and a nearby State Park named after them. This set me thinking. I have heard about them and their explorations but I didn’t know much more. With some Giggling on the Interweb I am now much better informed. Their pioneering expedition between 1804 and 1806 was focussed very much on exploring, understanding and documenting the territories of western America for the purposes of trade and sovereignty. What really surprised me when I started reading about their expedition was how relatively recently their work has been properly recognised in contemporary history writings. One hundred years after their travels many of their achievements were reported at a fairly superficial level. A complete set of their diaries was only published in 2004 to celebrate the bicentennial of their explorations. I plan to find out more after the tour is finished – I sense some fascinating reading … 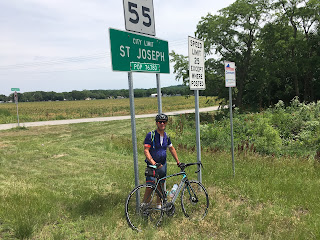 Almost as soon as we had crossed over into Missouri the road surface took a turn for the worse. Rough tarmac and potholes made me feel that I had suddenly been transported back to Britain! So for the next 10 miles we ground our way along until after a quick stop for a cold drink, we arrived at the outskirts of St Joseph. From there we rode along the South West Parkway which was a delight. A lovely smooth surface, which with a few switchbacks and rolling hills amongst a green, well-tree’d and evidently affluent landscape was pure pleasure to ride. This struck me as the perfect place for crit racing. If only! Even the minor inconvenience of a front wheel puncture made little difference. In 5 minutes with some help from Emil and Pete I was rolling again.  Eventually we reached the outskirts of ‘modern’ St Joseph and our hotel. And guess what? Those darned elves had beaten us again!