Today’s stage was the last full stage of the tour. Tomorrow is effectively a parade to the finish line. A bit like the Tour de France where the last stage is usually a ceremonial one and not a racing stage. So we all lined up together for the penultimate departure. I say “all” but not quite. Once again the Euros were depleted as Pete had snuck back to the early group. (Was it something we said?) So Barry, Bruce, Cathy (aka Person Number Three), Emil and I, plus Peyton (the new kid/mechanical genius/bike fixer extraordinaire) were the last to leave Brattleboro.

I should probably explain that Peyton (the kid) was recruited in Champaign (IL) to provide some extra mechanical support. He was working in a bike store there and seems to have keen kidnapped, willingly I understand, to provide some extra support for the tour. Bruce and Cathy (aka Person Number Three) have taken him under their wing and are rounding him out as we progress. Being young he has limitless reserves of energy and his antics on the bike are a constant source of amusement to us. But when all is said and done, his mechanical skills are outstanding. 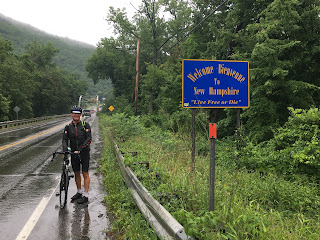 We rolled down the hill back into Brattleboro’ and crossed over the Connecticut River before reaching the New Hampshire State line – State Number 13 so far. Then it was up into the hills again with some quite testing climbs. Short and sharp but nothing too severe. For a lot of us, the euphoria of nearly reaching the end seems to have added some impetus and strengthened our resolve.

Much of the route was through forested areas, mixtures of conifers and deciduous trees with lots of delightful small villages in between. Unfortunately the road surfaces were quite sketchy which meant that I really had to concentrate on the tarmac in front of me. This is not the time for a wheel buckling pothole incident – or worse. I have however made a mental note that this is an area that would be worth revisiting should the opportunity arise. In fact I would quite like to do a tour across New England. Now there’s a thought…

As we progressed eastwards the roads gradually got busier and we received a few suggestions from lippy motorists who clearly didn’t appreciate sharing ‘their’ tarmac with us. Added to the sketchy surfaces it meant we had concentrate even more. This was one of the few occasions where I felt that I actually needed my rear view mirror. Thus far it has largely been a convenience. Not having to look back over my shoulder this morning meant that I could stay fully focussed on the road in front of me. 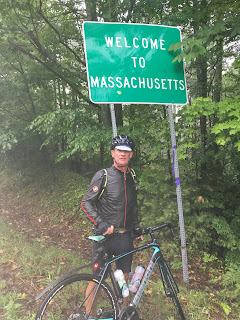 All of a sudden up popped the Massachusetts State Line. So suddenly that we almost missed it and had to turn around to get the photo for the collection. So that’s it, the last state of the tour, number 14. Quite a landmark really. Unlike 12 of the other states we have passed through, Massachusetts is actually a commonwealth. But the distinction is a subtle one with its roots in history. In the late 18th century constitutional writers sometimes used the word ‘commonwealth’ in the legal documents that created the which established a state. Around this time the term was used to describe groups of people who maxed up a nation or state. Commonwealths are states but states are not commonwealths. John Adams, the second President of the US when drafting the Massachusetts constitution. And for the record, the other commonwealth that we rode through was Pennsylvania.


As we approached Burlington, Bruce came alongside me and asked if I would be interested in doing a few extra miles at the end to turn today’s stage into a century ride. Well, it didn’t take much asking – another century. The Captain wouldn’t miss out on that. So that’s exactly what we did. We arrived at the stage finish and then turned around and did another seven miles to take us over the hundred. What a great way to mark the end of the tour!

Oh by the way I’ve forgotten to mention something. It rained all day. High fat drops of the stuff which glistened the roads and created some massive puddles. But who cares, it’s only water!