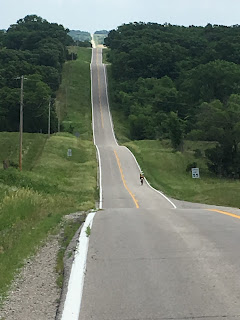 If yesterday’s riding was a little disappointing, today at least it was much more rewarding. Sunny skies, albeit in very humid conditions and a route that was mostly on quiet roads rolling through lush green countryside was precisely the recipe for an enjoyable day’s riding. Rolling was probably the word that best captured the essence of the day – a succession of short and usually not too steep climbs and descents. I say ‘usually’ because every once in a while a sharp little ascent would creep up on me and give my leg muscles an extra workout.

The critical factor in riding these rolling climbs is to select the right gear ratio at the right time. Too high for too long and it gets tough – changing down under load gets risky with the possibility of shipping the chain or worse still breaking it. I’ve never had the misfortune to personally suffer a chain break in this situation though I have seen it happen to other riders. Shipping or breaking the chain, the end result is usually the same : the ignominy of falling off, often in front of other riders.

Choose too low a gear too soon and you loose the advantage of any momentum gained on the preceding descent. It sounds easy but based on my experience today it is not. Climbs which look gentle from afar hold many surprises – a steeper or longer than expected gradient and perhaps worst of all, a false summit. Get it right and it’s really rewarding riding. Get it wrong and it can be both demoralising, especially on a long stage, or strength sapping on a hot humid day like today. I reckon I did OK today with I estimate an 80% success rate.

I also spent some time today riding solo and I enjoyed the chance to immerse myself in my own quiet reflections and thoughts. Reflections on the tour so far and thoughts of the people I have ridden with, including those who have now left the tour. As I have written, and will surely write again, good routes make good tours and this is a good tour, but it’s some of the people who I ride with who transform a good tour into a great tour. So to my riding companions, past and present I say, in the time-honoured cycling way “chapeau”. You all know who you are from our conversations, and the great company I have enjoyed and shared with you on the road thus far.

Our route was generally eastwards and with the benefit of a light tailwind it was fairly easy going, climbs excepted. Our first SAG was at Maysville where we were accosted by a hack from the local paper who wanted to get a scoop on our tour for the DeKalb County Record-Herald. A small group of us lined up for a photocall outside the gas station. There was a stack of copies of the latest edition, published yesterday June 7, on the counter of the gas station shop. A cursory glance suggested the paper was an important source of local news and information – the leader was a report on the monthly meeting of the Osborn R-O School District. As far as I can ascertain, the paper is only published in print form, bucking the trend back home in Britain to move increasingly towards Interweb publication. It wonder if we will make next week’s edition. 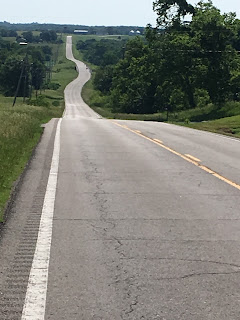 From Maysville we continued along the rolling roads until we joined a particularly rough, busy and unpleasant stretch of State Route 6 for around 15 miles. Once we turned off this we were back on proper quieter roads again with the rollers. A succession of long, straight transects meant that there were some spectacular views of the route ahead which often looked like a ribbon had been laid down stretching into the distance several miles ahead. The green and well-tree’d landscapes with, increasingly, fields of maize in between the delightful farm houses made for exhilarating viewing. 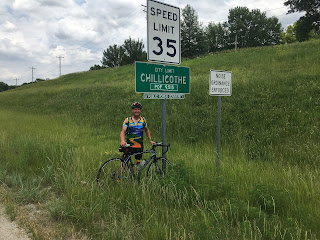 Gradually as we closed on our destination the density of properties increased and at around 85 miles we turned on to State Route 66 after pausing to take the customary end of stage town sign photo. As we turned on to the main road I looked back over my shoulder. It almost felt like I was exiting through some gates and leaving a magical world behind me. The last few miles had been especially enjoyable. Tough riding yes, on some of the steepest climbs of the day. But rewarding riding too – very rewarding. 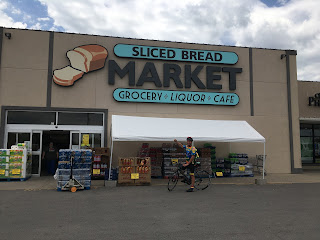 Chillicothe, and there was some debate in the peloton as to the correct pronunciation of the name (I’m not going there readers) is derived from the Shawnee language – meaning “big town” referring to a settlement about a mile from the present day city. Chillicothe’s claim to fame is that it is the “Home of Sliced Bread”. In 1928 the Chillicothe Baking Company began selling pre-sliced bread through local grocers – apparently the first time that pre-sliced bread was sold commercially in the world.

In a break from the usual routine Pete and I got haircuts once I had showered and changed. For $13 and an interesting chat with folk in the barber shop I got a nice neat number 3 which should set me up for the rest of the tour. And guess what? I’ve heard that it’s rollers again tomorrow. 148 of them to be precise. I can’t wait!