Last night things got a little exciting in Springfield. Around 1:30am I was woken by the sounds of thunder and heavy rain falling in the hotel car park. Add a few flashes of lightning and we had a storm. A proper storm! Whilst all this was going on my phone sprang to life as weather warnings were issued. The storm lasted for perhaps half an hour – I dozed fitfully through it – and several times just when it seemed it might be over, it reprised the action with more rolls of thunder. The sort of thunder that you could hear crashing away across the countryside for miles and miles.

Some mornings when I wake early I have a look at the weather apps on my phone to see what lies in store for us. I’m still using the BBC Weather app which seems to have reasonable coverage of conditions over here. I’m also using another app, AccuWeather, which provides more detailed local information. Yes, like many cyclists I’m a little obsessed with the weather. Having perused the forecasts I also had a peek at the news to discover that Champaign, today’s destination, had recently been struck by two minor tornadoes, each lasting less than one minute and registering at the lowest point on the tornado severity index. It seems that there was relatively little damage caused – thankfully.

With the prospect of weather issues on today’s ride I decided to play it safe and fitted my Swan neck mudguard to the back of the CV. Hopefully if it did rain and the roads were wet I wouldn’t suffer from a rain soaked chamois in my shorts! I find that to be particularly unpleasant. Well that and wet socks! Cycling readers will understand the subtleties here! 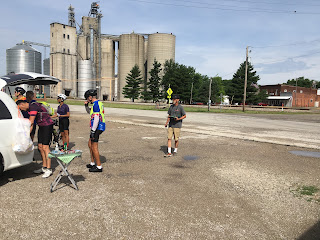 We said goodbye to Springfield and under grey skies, but with a gentle tailwind, headed off on an initially tricky route making several left and right turns through the suburbs. One again the ‘we’ here were The Fabs plus Person Number Three, Nashville Bruce and his chum David who had come down from Chicago to busk with us today. After only half a mile I looked back over my shoulder and realised that Pete and Emil weren’t visible. So I turned around to retrace the route and eventually ran into Pete who mentioned that Emil had had a puncture and had told Pete to go ahead as he would play catch up once he had replaced the tube.So the two of us headed off, eventually joining the others at the junction with State Route 54E. (For the record Emil made the catch about 10 miles further up the road.)

But it wasn’t all boredom. With relatively little traffic and easy spinning we rode doubled for most of the day, passing the time in conversation with each other. The rough road surface meant we still had to be on guard for potentially wheel buckling potholes – especially as several of them were filled with water from last night’s storms. We also had the occasional moment of excitement. At one point we were riding on a long, gently rising straight with occasional traffic coming towards us. Behind I could hear a truck approaching and dropping down through the gears to wait for a gap in the oncoming traffic before passing us. After about five minutes of this I could hear the truck rev up and start the overtaking manoeuvre.

Here’s the thing though. The truck driver needed to work his way through the gears as he picked up speed. However each gears change resulted in the momentary loss of forward speed so the overtaking distance required a lot more road. (We had eased the pace slightly to help the driver.) Up ahead we could see a car approaching and the truck driver tarted to slow down to pull back in but left it a bit too late. So the oncoming car had to pull off the highway and then off the shoulder onto the rough gravel roadside fringe, making a fearsome noise, in order to get by. Th really surprising thing however was that the oncoming car was Sheriff’s vehicle. We fully expected it to turn around, fire up its blues and twos and start chasing. But not a bit of it. Once the road was clear I could see the Sheriff pull back onto to the tarmac and was continuing down the road as if nothing had happened. And, by the way, the lorry passed us too – as soon as the road levelled out. 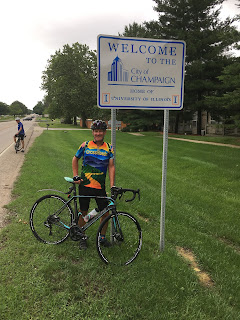 As this was an ‘easy’ day we took it at a fairly leisurely pace with two SAGs, at 33 and 64 miles as well as a stop for a drink at a Dairy Queen in between. Bruce had a puncture and Emil had a second one so that all added to the sense of an unhurried ride.The route notes had flagged up a bike shop on the outskirts of Champaign so we pulled over door a look round. Pete got the mechanic to check over his bike – a case of “if it ain’t broke, don’t fix it” and Emil got a new rear tyre. I bought a souvenir jersey and some track mitts to replace a pair that have disintegrated!

Now here’s the thing. Remember that I said I had fitted the swan neck guard before setting off? Did it rain? Yes, bucket loads of the stuff according to Itchytoo who had driven ahead. Did it rain on us? Not a drop! Such is the power of the swan neck!!