Late yesterday I received some very sad news that a friend of mine, Tim Elliot died while out riding his bike. Although we had never met face to face I count Tim as a friend. Tim was the central figure, the bottom bracket, that drove the Bianchi Owners Club USA forward. I contacted him earlier this year when I was preparing for my USA tour. From our very first exchange Tim was both extraordinarily helpful and very friendly to me. He was a source of great advice and good humour. But more than that, once I had started the tour Tim frequently sent me messages of support and encouragement which I really appreciated.

Regular readers will know that I regard fellow Bianchi riders as my extended family and I am proud that I have cousins and uncles all over the world. Whenever we meet (in the UK) our reunions are fantastic occasions. The cousins chat to each other and there is a lot of Passione Celeste around. Judging from the outpouring of comments and memories about Tim that I have seen my US cousins share over the last 24 hours, it is beyond any doubt that Passione Celeste, what I describe as the very DNA of Bianchi, is widespread and heartfelt. So today, I dedicated my ride to my Uncle Tim. And Tim, if you are reading this from afar, I hope you enjoyed the ride too. 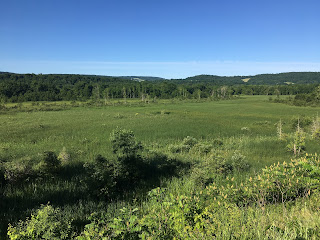 Leaving Herkimer this morning there was a distinct chill in the air. So much so that for the first time since we left Los Angeles I was wearing my arm warmers. With a blue sky and sunshine I suspected that it wouldn’t be long before they came off and I wasn’t wrong. Once again the route followed the Erie Canal and Mohawk River from start to finish. With yet more superb scenery and relatively quiet, smooth roads, the ride was a delight. Like yesterday, much of the ride was under dense tree cover but from time to time clearings and pockets of open farmland created spectacular views across the lush, green land.

With a relatively short distance to cover we were able to ride at a leisurely pace, stopping regularly to look at the views and take some photos. The European theme was still present, especially when we reached Amsterdam. First settled by Dutch immigrants in 1710, the area was called Veedersburgh after Albert Veeder an early mill owner. With an influx of settlers from New England the town’s name was changed to Amsterdam in 1803. The arrival of the Erie Canal in 1825 created a major economic boost for the town which became well known for the carpets manufactured here. The city was badly damaged by floods caused by Hurricane Irene in 2011. As I rode by today it seemed that the damage had largely been restored. 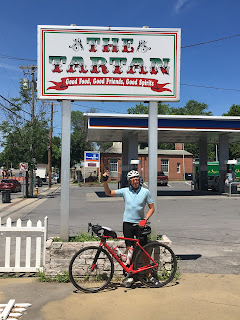 Before we set off Pete had mentioned that we would be passing through Scotia. I am not sure quite what he expected to find; he did express a hope for haggis, neeps and tattles but I suspected he was going to be disappointed (I was proved right). But in terms of distance and timing it was an ideal spot to stop and enjoy lunch and cold glass of beer. And enjoy it we did as we sat on the terrace of a bar/grill and watched people pass by on their daily routines. Scotia was established by Alexander Lindsay Glen who named it after Scotland, his home country. Historically its main claim to fame was for broom making. In the 1800’s over 1 million brooms were produced annually – that’s a lot of sweeping! Nowadays it is principally a residential base for people who work in the surrounding area.

We rode the final 15 miles to Albany, the New York State Capital along some lovely, gently undulating if rather rough roads. As we made our way along I found myself wondering what Uncle Tim would have made of today’s stage. I rather think he would have liked it. So Tim, rest easy and ride easy. Passione Celeste!