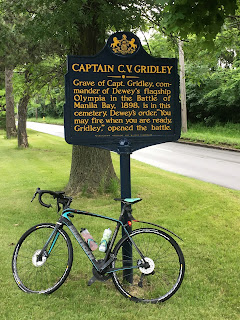 After enjoying a lovely leisurely day in Erie including a beer or three on the first evening, brunch at Dave’s Diner (superb), a visit to the Maritime Museum and a wonderful curry last night I was ready to get back on the road for what is now the final phase of the tour. Pretty well the whole of today was spent riding parallel to the southern shore of Lake Erie. State Route 5 heads gradually north east with occasional glimpses of the lake through the trees. As we rode out of Erie Bruce pointed out a sign commemorating Captain C V Grindley. So this Captain, riding a CV, just had to take the picture 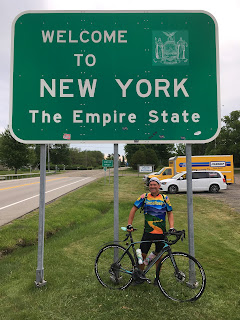 Around the 20-mile point we crossed over into the State of New York. This was a landmark moment for me and a realisation that the end of the tour is not far away now. The thought of entering a state that has its eastern edge on the Atlantic Ocean really did brings it home to me. I spent quite a few minutes thinking about what this means. Seven weeks in the saddle on tour is a long time and I have to say that while I am still in reasonable shape physically the succession of one night stays and the conveyor belt of chain eatery food is taking its toll. Fortunately for me the highs of riding more than compensate for the domestic challenges – most of the time. Of course it isn’t over until the fat lady signs. But today I sent word to the good people of Boston that the Captain is coming. He’s riding hard and fast and there will be fireworks, music and maybe even a dance when he arrives. Indulge me here readers; indulge me! 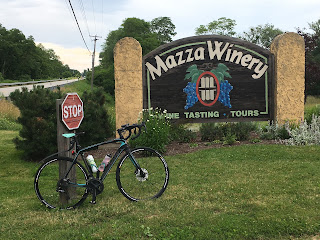 What was a complete surprise to me were the numerous vineyards that lined the road for the first half of the stage. Pennsylvania is the largest grape-growing region in the country after California and the Lake Erie area is known as ‘the Grape Belt of America’. Over two dozen grape varieties are grown including native reds (Catawba and Concord) and whites (Niagara), as well as a large number of hybrid species (Baco Noir, Seyval Blanc). There are also several European varieties such as Cabernet Sauvignon, Merlot, Pinot Grigio and Chardonnay. I could see that the soil was suitable but I was surprised that the climate was as I would have thought spring frosts might be a problem but clearly not – perhaps due to the lake’s microclimate. Vines have been grown in the state since 1683. The wine growing region has over 200 wineries, including several with an international reputation and others where a new generation of winemakers are challenging tradition, with some success. 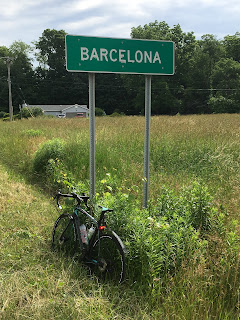 Now I’d like to let you into a little secret. Well, two secrets. Today I rode through Barcelona and Dunkirk on the way to our destination at Hamburg. That must be some sort of record for crossing Europe, surely. And talking of records I was pleased to see that I had claimed a Strava KOM (King of the Mountains) – on the Southwestern Rollers segment (4.7 miles). I lead the field by over a minute. Of course I’m bigging up the bragging rights here. But let me have some fun – please!

The first half of the ride was really enjoyable with a reasonable road surface, attractive scenery and relatively little traffic competing for the tarmac space. Unfortunately the second half was much less pleasant – the wide shoulder was definitely needed given the increased volume of traffic. I rode in to Hamburg with Chris who is from Manchester and now lives in Florida and is relatively new to cycling – golf is his thing and very good he is at it too. But I have to tell you that Chris is also a source of inspiration. Every single day since leaving LA Chris has ridden to the limit and has been determined to make it to the finish. But the real inspiration is that Chris has an incurable cancer, a rare lymphoma. (You can read more about him here.) So I felt very honoured to ride alongside Chris for a while today and share our tour perspectives. Compared to him, my struggles are trivial.


Once I had finished the stage I had an opportunity to tick off another item from my ‘to do’ list. Emil and his wife Eve invited Pete and I to join them on an excursion to see Niagara Falls. Although this was a very brief visit I am glad to have made it. It was a great way to end another great day. I’ve heard tomorrow could be quite tough so I’m off to get some shuteye now.