After a rest day yesterday it was good to be back on the road and CV seemed to be rearing to get the heck out of Flagstaff. Yessiree, we’re getting to grips with lingo hereabouts. As we rode out of Flagstaff I caught a glimpse of the San Francisco Peaks that define the landscape on the north side of the city. They are the remains of San Francisco Mountain which was a volcano until it collapsed following a spectacular eruption some 200,000 years ago. The highest mountain now is Humprey’s Peak which rises to 12,600 feet. Before the eruption the parent San Francisco Mountain was another mile higher than today.

The Peaks are very important to the culture and spirituality of  a number of American Indian tribes – the Navajo call them Dook’o’oosliid (the summit which never melts). The other major tribe in the area, the Hopi, has named them Nuva’tukya’ovi (place of snow on the very top). Today the range is a popular with skiers and there are a huge number of cycle trails to explore. There are even some local sages who assert that another eruption is due!

Our regular quartet, Dave, Emil, Pete and me (the Fab Four?) formed up pretty quickly as we left Flagstaff. Pete accurately described today’s stage to Holbrook as transitional i.e. covering the greatest possible distance by the most direct route. Unfortunately this meant that we were back on the Interstate (I-40) for most of the day, although we were following the line of the historic Route 66. With a strong tailwind we made great speed, rolling along at 20-25mph. Shortly after joining the Interstate I led us up what would normally be a very short, gentle uphill stretch – almost too gentle to call a climb. As I was riding up I noticed that my breathing was getting slightly laboured and a quick peek at my Garmin revealed that we were at an altitude of 6,800 feet. With the massive open landscape all around us it is easy to forget we are quite high up – well, high for me compared to my normal terrain in East Anglia. Fortunately the route profile showed that over the next 50 miles we would gradually descend to about 5,000 feet. 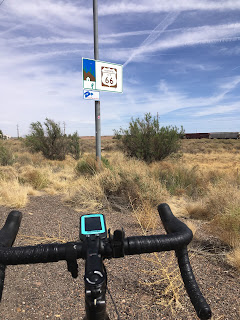 Riding along the Interstate is pretty boring. Today the shoulder was quite rough and gravelly – but still smoother than many of the roads I ride on back home. Riding the long straights where you can see the road stretching ahead for miles gets almost hypnotic. I’ve developed some mind games to pass the time. I look at the current mileage on my Garmin, pick a landmark and guess the distance to it. Then when I’ve reached the landmark I look at the mileage again on my Garmin. I’m not very good at this! Alternatively I try to guess when I’ve ridden a set distance, usually 5 miles. I’m better at this. What I DO NOT do is look at the Garmin to see how far it is to the finish – that’s a recipe for a headache! I do check the mileage at SAGs – at the second one today I thought of as a short after work ride, say 20 miles. To have finished ‘work’ and be riding at 2;00pm is a pretty good feeling! And today, from time to time, I let rip with a verse or two of that eponymous Chuck Berry song. You know the one, don’t you? Why don’t you sing a verse or two do get into our groove. Go on – I dare you! 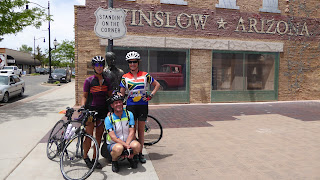 We reached the first SAG after 40 miles so that was a chance to break the monotony. Then it was more of the same for another 20 miles to Winslow. About 2 miles out from Winslow I had a rear wheel puncture (one of those evil thin wires from burst truck tyres) so that rang the changes. The Fabs were great and helped me with the tube change so I was soon underway again and arrived in Winslow shortly afterwards. First up was a moment to play the tourist by getting the obligatory pic while Standing On The Corner in Winslow Arizona. I reckon if Jackson Brown and Glenn Frey who wrote the song (Take it Easy) got a dollar for every photo taken they would have earned more than through song sales and publishing royalties. With the construction of the Interstate, Winslow, like many towns on the historic Route 66, has had to reinvent itself and get a new USP. ‘That song’ has proven too be the catalyst though I have to say that based on what I saw of the town, success has been mixed. 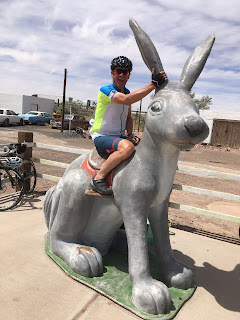 Once we’d all posed on the corner we adjourned to a nearby Mexican café, Las Marias, for an early lunch. After chowing a rather tasty bean enchillada I reluctantly ready to set off again for the next leg of the Interstate experience. By now the wind speed had picked up with gusts up to 40mph and was blowing from the south i.e. a crosswind. This meant that the riding was pretty tough and staying upright required considerable concentration and strength. We rode along in a mini-echelon – in the time honoured way that cyclists cope with sidewinds. After another 25 miles we turned off for the second SAG of the day. At the morning’s Route Rap Paula had told us that we would ‘Ride the Rabbit’ which had got me slightly worried. Was this some sort of novel Arizona custom? Was it legal? Would I rise to the challenge whatever it was? These, and many other unmentionable thoughts had been playing on my mind for much of the day. Well readers, I’ll let the photograph speak for itself.  The Jack Rabbit Trading Post is one of the iconic sights on Route 66 – it even has its own named exit on the Interstate. And in case you’re wondering, no, I didn’t get arrested for riding the rabbit. That’s what it’s there for.

After our little entertainment it was more of the same – back on the Interstate for the final 15 miles to Holbrook and the end of today’s stage. That darned side wind didn’t let up. If anything it swung around a tad so that I was riding into it slightly. We stopped at a Dairy Queen fast food outlet for a milkshake about half a mile before our hotel. When I got off the CV my right hand was numb and my forearm was quite fatigued from the effects of holding the handlebars fighting the side wind. But rest assured, within an hour of arriving at the hotel and after a clothes wash and a shower I felt great again. As the hotel, which is quite comfortable, doesn’t provide dinner, Itchytoo had been deputised to order in vast quantities of pizza for a party.  When I popped over the road to the gas station to buy some beer for The Fabs, the attendant commented that he had sold more beer this evening than he had in the rest of the year. Bring it on!