There was a distinct chill in the air this morning as we lined up for the stage start outside our hotel in Grants. This was also quite a poignant moment for The Fabs as this was also the last day that we would be riding with Dave. He’ll be heading home to Maine tomorrow as he was only able to ride the first part of the tour. I have really enjoyed riding with him over the last couple of weeks. He has a very laid back, almost laconic personality but as I got to know him I have realised that he is both a very generous person and has a razor sharp sense of humour. He owns a brewery so he has played an important role in ensuring that our post ride refreshments were of the highest standards. The Fabs will never be quite the same without him. 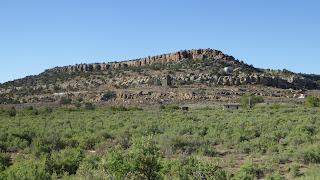 We were really pleased not to be riding on the Interstate today, at least for the first part of the ride. We were soon back on to Route 66 and heading east on a very quiet road. So quiet that we were able to ride two and three abreast and have some great conversations. Around us, the hills and bluffs seemed much closer and we marvelled at the magnificent scenery. This was a landscape that was very familiar to me from the countless Westerns that I have watched on tv and in the cinema. In a few places I almost expected to see John Wayne, Kirk Douglas or Spencer Tracy (that dates me) leading a posse after some bandits or outlaws. The rock faces even hinted at the perfect place to stage an ambush. 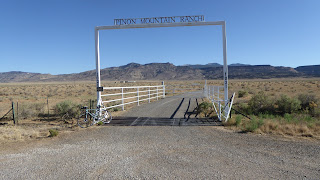 Riding along Route 66 I was really struck by how much the fortunes of people who lived alongside the highway have changed with the arrival of the Interstate. I passed several ranch entrances which hinted at economic activity beyond the gate. I was also struck by the number of abandoned and derelict properties and stores which had closed because of a lack of passing trade. There were still quite a few properties where people were making some sort of a living – a small roadside convenience store or a business supporting the farming activity such as a blacksmith or an ironmongers. The most vibrant seemed to be the public service facilities such as the post offices and a school that I passed which literally appeared to be in the middle of nowhere. Occasionally we passed through small communities and hamlets. Once such place was Laguna, a Pueblo or American Indian settlement, founded in 1699. The adobe mud buildings characterise the architecture here. Overall I felt quite sad to pass through an area where the communities seemed to be slowly disappearing or dissolving into the desert sands. Of course I may have misread the signals and can only tell it like I saw it. 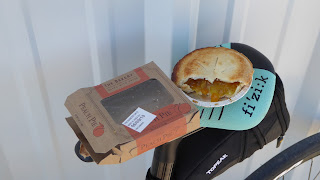 After riding for about 30 miles we arrived at the day’s first SAG in a service area. This was a signal that we would be back on the Interstate for a spell. The highlight of the SAG were som pies that Paula had obtained. The CV opted for what it told me was a rather tasty peach number! Just as we were about to set off Dave discovered that his rear tyre was soft so a tube change was needed. I was impressed that after fitting a new inner tube he then patched the old one! He said that as he was riding large (32mm tyres – I’m using 28mm) he was happier to use larger tubes compared to the smaller size that I use. Once Dave was ready we set off along the Interstate (I-40) which fortunately had a wide and generally smooth shoulder, reminiscent of those in California. There was still quite a lot of debris though which led to Emil having a rear wheel puncture after about 5 miles. The rest of The Fabs rose to the occasion and Emil was soon ‘good to go’. Fortunately we completed the remaining 25 miles of Interstate riding without any further incident and arrived at the second stop where we refreshed ourselves with ice creams at a Dairy Queen outlet. 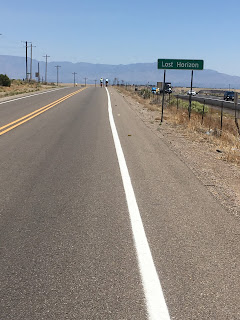 Then it was back on the road with a 4-mile hot drag uphill. Approaching the crest which I had been riding towards for what seemed like forever (it was actually 23 minutes according to Strava) I was amused to see a sign reading ‘Lost Horizon’. In the distance were the mountains, the tail end of the Rockies, which I later discovered rose two about 10,000 feet. Cresting the climb we rode down and over I-40 onto a magnificent downhill straight which ran all the way into Albuquerque. With a straight and a clear road ahead this was a great opportunity to get down low over the crossbar and freewheel – I got up to 38mph before the traffic lights. The day’s final  landmark was a crossing of the Rio Grande which over the course of nearly 1,800 miles (it’s the 4th longest river in the US) flows from Colorado to the Gulf of Mexico. We paused to take a photograph of the sign at the start of the river crossing but had to move on swiftly because out of nowhere a vagrant, who looked like a Zombie, appeared and started moving menacingly towards us. We made it to the other side where Pete took a picture of me posing – i.e holding the CV aloft above my head. We do like a bit of posing!


A fast ride through the outskirts of Albuquerque to our hotel for the night. Dinner this evening was a rather special event as we said our goodbyes to Dave and also to Laurence who are leaving us. A couple of short impromptu speeches commemorated the occasion. Dave absolutely hit the nail on the head when he said that what makes a good ride is the route you ride; what makes a great ride are the people you ride with. Chapeau Dave, the Fabs are going to miss you.