With a tinge of sadness The Fabs, now minus Dave, rolled out of Albuquerque under blues skies with the promise of a hot day ahead. I think we’re all going to miss Dave’s company on the road. More positively today was the first day for some time that we wouldn’t be riding on the Interstate. Hooray!  The theme of the first part of today’s ride was climbing, rising 2,000 feet over the first 20 miles. This was a long, steady climb on a wonderfully smooth surface, ideal for spinning up. Starting at an altitude of 5,000 feet this was not a time for heroics but instead one for setting a measured pace and maintaining a steady breathing cycle. Ahead and to our side we could see the mountains which rose I’m guessing to over 10,000 feet. In the clear air, once again the views were great.

Today we were riding on the Turquoise Trail, a scenic route set in 15,000 square miles of land. To put that in context that’s 10 times bigger than my home county of Suffolk! The Trail is named after the blue-green rocks originally mined by the Pueblo people over 1,000 years ago. Prized as a precious stone, the turquoise is widely used in jewellery. The area was also the site of a big gold rush in 1825, pre-dating the more famous California Gold Rush by several years. Traces of the mining activity were visible as we rode along the road. It is a hugely popular tourist area and we were passed by several groups of motorcyclists riding their Hogs (Harley Davidsons) with their distinctive rumble and roar. We also saw lots of RVs (Recreational Vehicles) and camper vans. Today was the start of a holiday weekend – Memorial Day is on Monday – so lots of people were making the most of it. 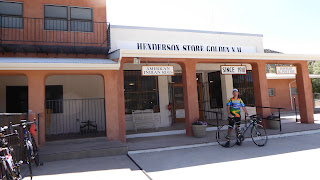 After 35 miles we arrived at our first and only SAG of the day at Henderson’s Store which today sells Southwestern American Indian jewellery, rigs and pottery. I had a quick look around inside and marvelled both at the items on display and the prices. I marvelled at an pair of old assay scales, which had been magnificently restored with the brass gleaming. There were lots of old black and white photographs including one of the store’s founder sitting in a rocking chair on the front step. I could almost imagine him surveying the trail expectantly, whilst chewing on some tobacco and awaiting the next passing travellers. 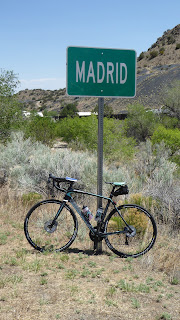 Moving on we then descended to the small town of Madrid, which is pronounced Maadrid, and not like the Spanish capital. This was a lovely little ramshackle place with lots of small galleries, shops and eateries. Originally a coal-mining town (until 1954) it is now a popular tourist destination it has quite a boho, hippy-like feel to it – once you get past the bustle and noise of the visitors. We stopped for lunch at a roadside restaurant, sitting under the trees and watching all of life pass us by. In the hot sun I was reminded of Pooh Bear – “sometimes I sits and thinks and sometimes I just sits.” Today I just sat and tuned out – wonderful! The homemade burger and cold beer gave this the perfect ambience. 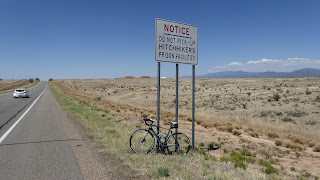 Sadly, I had places to go and people to see so we broke the reverie and headed off on the final 20 mile leg of the day. I was glad of the initial downhill run as with a longer than usual lunch break my legs had stiffened up. After a few miles of gentle spinning, bike and rider were reunited in perfect harmony – what lyricism! Approaching Santa Fe I could see a massive building ahead of me on my right. The road-sign gave the game away so I upped the cadence and sped past. Not the place to linger. 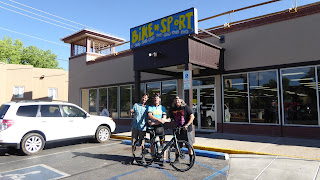 Arriving in Santa Fe I had a mission to undertake. For the last couple of days the rear brake on the CV has gone very spongy to the point of being almost ineffective. Riding mountainous descents with only one fully working brake is not something I want to do. I guessed some air had got into the hydraulics and the brake needed bleeding. Although I have brought a bleed kit with me ideally I wanted to get it done in a shop so that if there was an underlying issue I would be covered. With a quick spot of Giggling on my iPhone I headed off with Pete in tow to Bike and Sport on the other side of town. They were absolutely brilliant. Despite pitching up unannounced Tony Ferrari and his mechanic (whose name sadly I didn’t get) came to my rescue. My decision to visit the professionals was a good one since they discovered that the allen key slot in the bleed cap on the top brake levers rounded and couldn’t be undone. (This is apparently a known issue with this version of Shimanono levers and they had a stock of replacements on order.) After about 20 minutes with a bit of a  workaround the CV was fully functional again and I was both a happy and hugely reassured rider! Considering that I pitched up unannounced out of nowhere late on a Friday afternoon their response was beyond outstanding. So chapeau team Bike n Sport. And if any readers happen to be in the area with a bike problem this has to be the go to place for a fix. But perhaps, unlike me, a ‘phone call first would be appreciated.

Then it was back to the hotel for a shower and dinner. Tomorrow is a rest day so we’re going to explore Santa Few. Watch this space readers ….!