As I walked down the stairs from the balcony outside my room at about 6:00am hotel I bumped into Itchytoo (remember him?) who greeted me with a big smile, as he does every morning. In a slightly conspiratorial tone he said: “You’re going to love today. It’s going to be spectacular.” So that set me up for the day. Our route was going to take us out of Cottonwood to Sedona and then on to Flagstaff. I had read that as we approached and then rode past Sedona we would be passing through its Red Hills but I didn’t know any more than that.

After the pre-ride Route Rap from Paula we rolled out of Cottonwood heading north east. Behind us I could just make out Jerome on the side of yesterday’s mountain and above it a stretch of that thrilling descent. The first part of today’s ride wasn’t particularly rewarding as it was very busy and we were being passed by a constant stream of cars and trucks. Once again the road rolled along as it rose steadily upwards. Gradually it dawned on me that the character of the landscape was changing. Gone were the browns and tans of the desert landscape now replaced with more greenery and a red hue to the soil. In the distance I could see some cliffs that had the same distinctive red hue. We were entering sandstone country. 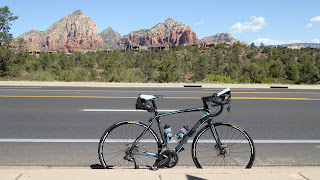 Rounding a corner I could make out a spectacular cliff formation, weathered into towering columns and pillars. The layered, rust coloured rock faces were stunning. As we rode on, the rocks took on even more spectacular shapes and colours.  I spent so much time looking around and being captivated by the views that I found it difficult to stay focussed on the road I was riding over. Arriving at Sedona we stopped for coffee at a café that Paula had recommended during the Route Rap. The view from the terrace was quite simply amazing. I was looking at millions of years of geological history which had been shaped into the most amazing patterns and shapes. The views were almost beyond description and my photographs don’t do them justice. I could have sat here all day in the warm sunshine and soaked up the landscape. But we had to press on. 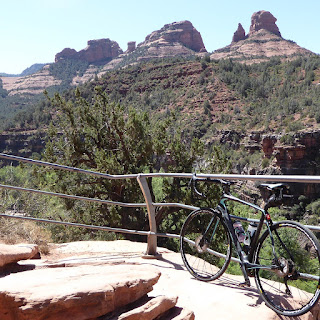 Leaving Sedona we entered a canyon which gradually closed in as we rode along it for next 12 miles. Covered with Ponderosa pine, oak, ash and other deciduous tree species we were now in the, part of Coconino National Forest, managed by the US Forest Service. My forester’s eyes took a close interest in the landscape I was riding through. I’ve discovered that the management plan for the forest has recently been updated which piqued my professional interest so I’ve made a note to have a look at it after the tour when I’m back at home. There were lots of small attractive campsites all along the valley and as this was the weekend they all seemed busy. The landscape reminded me of a Scottish Glen but on a much larger scale.

Gradually as we reached the head of the canyon, the road began to kick up until rounding a corner I looked upwards to see it way above me. So it was game on. I had arrived at the start of the climb proper. Over the next two miles the road climbed steadily upwards through a series of spectacular hairpins. As I climbed in the hot afternoon sun I could feel my breathing getting slightly more – the effects of altitude. The most challenging parts of the climb were riding round the hairpins where the gradient increased noticeably before flattening off when the road straightened out again. This is the opposite of many European climbs where the gradient often eases through the bends. Climbing the face of the mountain was a bit like ascending a ladder a rung at a time. As I ascended I could see the road I had travelled below me – and it was a really satisfying feeling to be able to measure my progress. 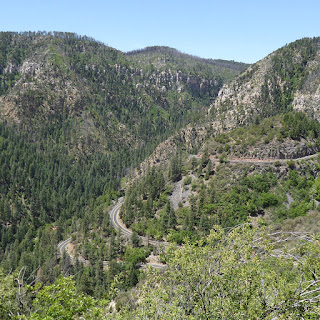 Eventually with a final left curve I arrived at the summit (6,400 feet) where Paula was standing to both cheer us on and also make sure we didn’t miss the turn into the SAG. I rolled into the large car park and did a couple of laps spinning a low gear to relax my legs before climbing off. After a cold drink and some tasty strawberries I rode over to the viewpoint look down at the climb I had just completed. It was a really satisfying feeling to look down through the hairpins and back towards Sedona, several miles behind me.

On the path to the viewpoint I passed a row of stalls with Native Americans selling a selection of goods – jewellery, artwork, clothing and so forth. The surrounding area has been inhabited since 10,000BC by Paleo-Indians who hunted game in the area. Over time, the population of hunter-gatherer tribes flourished and there is a range of rock art visible near Sedona.  More recently the Yavapi and some nomadic Apache tribes settled in the area until, in 1876, they were forcibly removed. Prior to coming on the tour I read a book about American history. The chronicle started in 1492 when Columbus arrived on the east coast. I am fascinated to learn more about the history of this nation prior to 1492 but there does not seem to be much available to read. I understand that unlike Europe were there are lots of written accounts, much Native American history has not been written down and instead has been passed through the generations by word of mouth. I plan to do some research later this year as the few glimpses I have had sound really fascinating. The final leg of the day’s riding took us into Flagstaff along a newly resurfaced road (I could smell the fresh tarmac in the air). This was a short day and we arrived at the hotel at 2:00pm before our rooms were ready. So there was a chance to enjoy a cold beer and chat amongst ourselves. The tour support crew had set up a service station in the hotel car park so I was able to wash the CV, degrease the chain and give it the once over. It seems to be holding up to the rigours of the tour remarkably well. I am really enjoying riding it and getting to know its idiosyncrasies. By way of an update I can also report that my new shoes have solved the tight foot issue – I am quite comfortable now.

Do you remember that Itchytoo told me today was going to be great? Well, I played a little joke on him when I arrived. He asked me what I felt about the day and I said that I had a complaint to make. A look of deep concern passed across his face. I told him that I was disappointed with the description of today in the tour brochure. It had misrepresented the quality of the day by failing to say just how wonderful it was. It was hilarious to watch Itchytoo process what I had just said before he realised that I was joking. The look of relief, followed by laughter when he said “You got me, man” was a great way to end a great day. I’m expecting Itchytoo to get his revenge sometime in the next five weeks…!

Tomorrow is a rest day and I’m planning to visit the Grand Canyon which is only 60 miles away. I’ve never been there before so it seems too good an opportunity to miss. And in case you’re wondering, no I won’t be riding! Pete has booked a guided tour for us. So, I’ll probably have a day off from the blog too. I’m hoping to have some great pictures on my Instagram so do have a look.

Several readers have emailed me or commented on the social media about the tour. Apologies if I don’t respond – what time I have off the bike is very full with the domestics. In fact a few folk have asked me about how my day is structured so at some point, perhaps on the next rest day I’ll try to describe a typical day on tour.