Today started where yesterday ended. Well obviously I stepped out of the same hotel which I had arrived at yesterday evening. But we were back on the Interstate (I-10) for another stint of riding alongside the trucks whilst dodging the potentially tyre shredding debris that lies on the hard shoulder. Once again, most of the truckers moved to the outside lane to avoid battering us with their tail drafts. I can vividly remember doing time trials in the 1970’s on the A1 in Lincolnshire and Nottinghamshire. Then it was deemed good tactics to ride as close to the carriageway as you dared in order to benefit from the suction effect of the air as the trucks passed by. Over a ‘25’ it was reckoned that you could gain a few precious seconds. 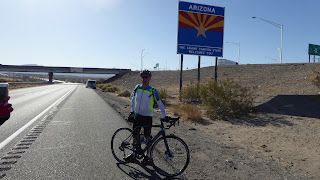 We reached a significant point today after only 5 miles and left California and crossed into Arizona. Only another 13 States to go…. Our entry into Arizona was also heralded with the start of a 7-mile climb. In fact most of today’s stage would be uphill, gently uphill. As I climbed I could feel the sun doing its work and the air temperature was steadily rising. (According to my Garmin it peaked at around 35C/95F.) This was going to be one long hot day. At 22 miles we swung off the Interstate and into a service station to nab a cold drink. The local Burger King outlet was on hand to provide our fare. I snagged what I thought was a banana milkshake from the fridge but after opening it I realised that I was actually holding a small bottle of skimmed milk! Oh well, it’s all protein.

Heading out of the service area and back onto the Interstate we could see the road stretching ahead of us for miles and miles. This was to be the defining feature of today’s ride – long, straight roads. After a couple of miles the Route Notes announced “Begin 10 mile climb” so it was back into a low gear and spin away. To be sure I’m not misleading you, the climbs here are very gradual and rarely above 3 or 4 percent. Most of the time they rise at around 1% with the occasional kick upwards. Ahead of us as we moved along I spotted a couple of riders on touring bikes complete with front and rear panniers. As we drew alongside we slowed for a brief chat – one of the benefits of riding on such a wide shoulder. It transpired that one of the pair had set off from Halifax, Nova Scotia earlier this year and had already traversed the US and was now heading for Argentina. Yes, you read that right – Argentina! As I wished him well and bade him farewell I have to say that I felt rather feeble. My own attempt to cross the US of A seemed rather trivial by comparison. As I reflected on what such a huge tour would entail I started dreaming of perhaps the ultimate end to end ride: Alaska to Argentina (Terra de Fuego) tour. Well, let’s get to Boston first.

After about 36 miles we finally said goodbye to I-60. And yes, I did say goodby, and good riddance. Well, actually I shouted ‘Goodbye and Good Riddance’. I can’t say that I especially enjoyed the experience of riding the Interstate but I do appreciate the pragmatism as it’s the only way to travel east hereabouts without adding  significantly extra miles.  Swinging on to State Route 60 was a delight. Mostly a well surfaced road (one stretch was pretty rough with tar filled frost cracks) and with virtually no traffic I was able to spend more time looking at the surrounding landscape. By the time we reached the first SAG in the hamlet of Brenda at 44 miles I was cooking. The sun was beating down and the desert landscape stretched for miles in every direction. Diving into the gas station I emerged with a Double Caramel Magnum ice cream. Quite simply the perfect coolant on what was now an exceptionally hot day. As we still had over 70 miles to go, we watered up, signed out and headed back down the road. 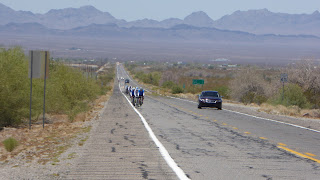 As I was riding along I tried to describe the landscape to myself. I’m going to try and share this with you. It is a landscape that I have seen a thousand times before, but only on tv or in the cinema. Close up there is sand, lots of sand which is covered in small scrubby bushes. As we headed east I noticed that the proportion of cactus trees was increasing – the classic multi limbed type that appear in almost every western. The land was largely devoid of animal life, just the occasional lizards scurrying for cover and a few birds of prey  circling lazily above us like vultures waiting to swoop should we fall. The air was remarkably clear so visibility was excellent. In the far distance and on either side were a series of bluffs and low hills with higher mountains even further away. In the distance we saw a couple of dust devils – sand bearing whirlwinds. Fortunately they were moving away from us.

It was incredibly hard to judge distances. At one stage I could see the road stretching out in front of me in a straight line and I picked out a point which I guessed was about 5 miles away. After riding at an average speed of 18mph for 20 minutes I seemed to be no nearer. In fact it took me about 50 minutes to reach the point I had selected. The scale of the landscape here is simply breathtaking. Riding through it on a bicycle brings home the enormity of the country. Later on, when looking at a wall map of Arizona and the route we had traversed, it was pretty sobering to discover that we had made a minor scratch on the side of the state. Humbling is probably the best word to describe my feelings. I feel quite incapable of accurately describing what I saw and felt today. All I can say is come and see it for yourselves. And at the risk of piling superlative upon superlative, what I saw today was but one small part of this enormous country. There is more to see – much, much more as I hope to discover in the days ahead.

So far I have only had limited opportunities to interact with people in the places we’ve passed through. Mostly in our hotels, the gas stations and roadside shops where we refuel. Everyone seems really polite and sincere. Well, today my faith in humanity was given a real boost. Sometime around midday after riding another long, long straight the route notes told us that we were approaching Hope which had a store. The perfect place and time for a quick stop for a cold drink. I could almost smell a coke coming on. 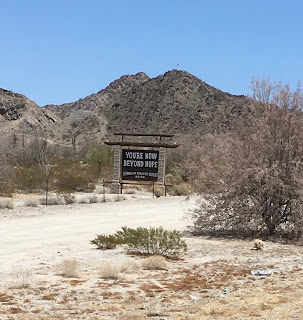 Well, unfortunately the shop was closed. There were quite a few of us hoping for a drink stop so the air of disappointment was palpable. Then from around the corner a couple appeared with their dog. They had stopped in their rv to meet their parents for an alfresco lunch. Before you could say ‘Froomedog’ they dived into the rv and emerged bearing a large case of water bottles which they set down in front of us and told us to get stuck in. Over the course of the next several minutes we chatted with them about our tour and they told us about their holiday and quest for a new home. They were really cheery and no sooner had the water bottles been poured down our throats and over our heads and arms then another pack was produced. Despite our best efforts, the couple refused any form of payment saying that their reward would be greater in heaven! What nice people. As we rode away I smiled at the sign reading ‘You’re Now Beyond Hope’.

Most of the rest of the day continued in this vein. Hot, hot temperatures and long, long roads. With 9 miles to go, relief came in the form of a nice fast downhill run into Wickenburg, our overnight base. Although I was hot and frazzled, once I had my shower, washed my kit and headed to a local saloon bar for dinner (a superb steak). I felt pretty good and looked back on a hard, challenging day’s riding but a day that was simply outstanding. Today was the longest day of the tour. I had completed my first ever century ride in the US of A. And, readers I can say without any doubt that Captain Century is feeling pretty pleased with himself. Apologies if I’m gloating a bit!