I can sum up today with three words: straight, flat, wind! Straight refers to the road which stretched endlessly to the horizon. And when I eventually reached the horizon it stretched on again to the next horizon. And on to the next. As far as I can work out from looking at Ride with GPS the first straight was 38 miles long before it curved gently on to another shorter straight which was ‘only’ 26 miles long. The terrain was generally flat with only a few fluctuations. This meant that I could see for at leat 10 miles in every direction.

Today we were also riding into a headwind. I have an app (Windsock) that steals my Strava data and does some clever stuff with the weather data to produce a graphic and some analysis that told me that I had ridden in to a 5-10 mph headwind for 77% of today’s ride. That may not seem particularly windy but be assured on those straights it certainly increased the workload, especially as I was still recovering from yesterday’s 110-mile stage.

Today we recruited a session player into The Fabs. Greg is from Oklahoma and will be with us for a couple of weeks. He is reasonably familiar with this territory – we’ll be in Oklahoma tomorrow – and has slotted in nicely. I say ‘slotted in’ because riding a pace line where we share out the work is the most efficient way to counter a headwind. With a road racing background, Greg is clearly a strong rider and well-used to through-and-off’s. So, it’s nice to be a quartet once more.

Rather like yesterday, there is a dearth of facilities in this area. We passed the last shop and restrooms at 25 miles. From then on we were reliant on the Crossroads Pop-up Alfresco Diners. Today, They were conveniently located at 29 and 65 miles on the stage. Riding on long roads in flat country can become quite monotonous so I am always on the lookout for ‘excitement’. Anything to break the stupor. My reverie was broken by Pete’s bike (a Specialised) which tried to mate with the CV and gave us both quite a shock. Fortunately the CV resisted the amorous advances of the Spesh and Pete and I were both able to maintain our dignity. Now I’m guessing readers, that some of you are wondering what the heck I’m writing about. Well, we had wheel contact which in many situations is devastating, frequently leading to rider road rash as riders and bikes slide along the tarmac. 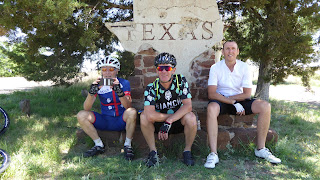 The major landmark of the day was at 54 miles when we rode our of New Mexico and into The Lone Star State, Texas. There was a novel stone sign, complete with bullet holes, top welcome us. I’m claiming that the bullet holes are authentic; other riders may (will) disagree! 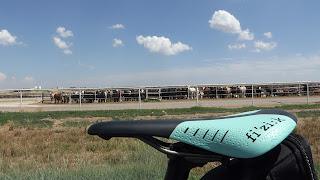 As we rode into the State it became obvious that we were in cattle country. A succession of livestock trucks and trains passed us. Greg told me that there 84 (empty) cattle wagons being towed behind the two engines. That implies one heck of a lot of steak. I’m sure that you’d like to know that the Annual Cattle Review for 2017 recorded 12.3 million head of cattle. That equates to just less than half a cow for every person in the State. Fascinating! Approaching Dalhart we passed a couple of gigantic cattle feeder stations where the livestock are brought for fattening before going to the slaughterhouse. I have never seen so many cows in one place in my life. As I stopped to take a picture the animals in the nearest pen strolled over to have a good look at me. I’m sure the fascination was mutual. The other giveaway was the aroma. The smell of methane was in the air. While I’m in trivial facts mode I can report that on average 1 beef cow produces about 200 litres of methane per day. That is a lot of farting. Now, I can sense the inevitable question, so here’s the answer. The average human farts between 0.5 and 2 litres of methane per day. I bet you never thought you’d be reading stuff like this in a cycling blog. And for the sake of completeness I have no idea what cyclists produce but based on my observations from the back of the pace line I’d say it’s above the human average and probably less than that of a cow. Let’s leave it there!!

Well, that’s all helped to pass the time, a major goal for today. Combatting the mental stress of riding with relatively little stimulation was the toughest part of the ride. Arriving at Dalhart, which has the feel of a frontier town about it, gave me a huge lift so Pete and I adjourned to the nearest Dairy Queen to ‘celebrate’ with a vanilla milkshake. Unfortunately, the guy on the counter was operating solo and appeared to work at only one speed – reverse so we had to wait for our protein infusion a tad longer than we would have wished. Once we had recharged ourselves we headed over to check in at our hotel. Rumours of steak for dinner are almost certainly true. And guess what? We’ve got more straight roads tomorrow. Will we break the 38-mile record? I hope not …