Thus far the tour has been pretty flat. And by that I mean flat in terms of the terrain, not in terms of interest. Well today that all changed. The GPS track promised nearly 60 miles with just over 6,000 feet of climbing and a maximum gradient of 16%. The route profile showed two climbs, at 20 miles and again at 35 miles. They route notes also mentioned a succession of false flats and false summits along the way. So after the largely pan-flat and straight roads of the past few days I was looking forward to a different type of riding. 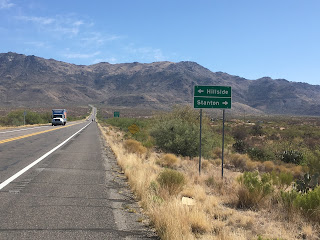 The four of us (Dave, Emil, Pete and myself) rolled out of Wickenburg along a beautifully smooth highway – described as a scenic route. Another hot day under cloudless blue skies beckoned. Even the wind seemed to be co-operating. In the far distance I could see the range of hills that we were heading towards. Judging from the roadside billboards and signs that we passed this was very definitely Republican territory. Putting politics to one side I had my first sighting of one of those iconic American freight trains – a tanker train which was parked in a siding. I counted 62 long black tankers as I rode by.

Now thus far I have been pretty impressed with the consideration of the motorists, car drivers and truckers that we are sharing the tarmac with. Most give us a wide berth when overtaking and often a friendly toot on the horn as they pass us by. Even when they have had to slow because of oncoming traffic the majority are very patient, waiting their moment to pass safely. A very small minority are pushy, blasting their horns and overtaking with a minuscule gap. Unfortunately today we experienced a spot of road rage when one driver passed me, blasted his horn, slowed down and shouted “Get the f**k of the road”. By all accounts, I got off lightly. A mile or so ahead of me, Emil was virtually run off the road and several other riders appeared to suffer a similar fate to me. In my case, it was only verbal abuse and as regular readers will know, my response is to wave at the passing motorist as if they are my new best friend. As long as my physical safety isn’t threatened, life is just too short to get overly wound up.

At 16 miles, as it was warming up we stopped for a cold drink and it was here that several of us realised that we had each been road raged. Dena, Paula’s husband phoned the Highway Patrol to alert them and they said they would step up their patrols on the road. Undaunted we set off again to begin the first climb of the day, a 7 mile ascent to Yarnell Pass. With a long straight approach I could see the challenge that lay ahead. As I tapped it I out on the pedals a sign caught my eye – a turning to Stanton. This confused me momentarily as I thought I was back home in Stanton, Suffolk.

Gradually the road ascended and I could see it rising up the hillside ahead of me. Gaining height through a series of hairpins I was reminded of some of the climbs of the Pyrenees. Long and gradual with spectacular views downhill. I stopped a couple of times to take some photographs and have posted a selection on my Instagram. When I get home I plan to produce another of my photo album complications. If you’d like to know more then have a look at the films tab at the top of this page. My Strava stats show that the segment was 8.3 miles, rose 1900 feet to 4,850 feet with an average gradient of 4.2%. I completed it in 54 minutes. Not quick, but then I did stop to take those pictures. 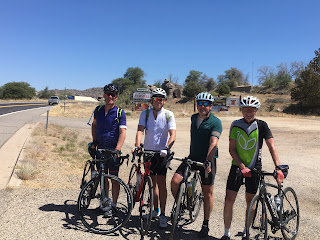 Cresting the summit at Yarnell I arrived at the first SAG to find the cheery faces of the support team cheering us in. This was a welcome halt as I had been drinking copious amounts of water and needed to refill my bottles. Yarnell achieved tragic notoriety in 2013 when 19 firefighters, the Granite Mountain Hotshots, were killed whilst fighting a bushfire started by lightening. The fire devastated over 8,000 acres of land in the area. The tragedy has been captured in the film ‘Only the Brave’, released in 2017, with a cast including Miles Teller, Josh Brolin, Jeff Bridges and Jennifer Connolly.


As we descended, the character of the countryside change dramatically. Gone was the arid scrub of the desert, replaced for a few miles at least by a more pastoral, farmed landscape with horses grazing under shady groves of trees. I noticed that several of the properties had signs for Maughan Ranches which I subsequently discovered owns over 500,000 acres of land in Arizona divided across 15 individual ranching units. That is one big operation! After returning to the desert landscape for a while we passed through the graphically named Skull Valley to reach a store set in what felt like the middle of nowhere. With the final climb ahead of us this was the ideal time to recharge batteries with cold drinks and ice cream. Despite being in a fairly isolated location there was a steady trickle of local people calling in to get their essential supplies. The proprietor looked as if she had won the lottery serving the hungry and thirsty cyclists. I’m guessing that her turnover for May has shown a substantial upturn. So yes, cycling is good for the local economy. 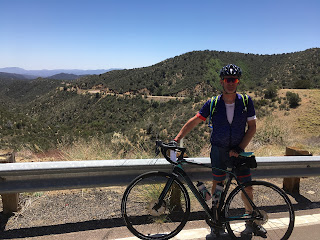 Resisting the temptation to linger we set off on the final climb of the day, 11.7 miles ascending over 1,000 feet at an average of 1.7%. This was quite a different climb to the one to Yarnell. Much gentler with many more curves and hairpins broken up by some false summits. The other main difference was that we were now amongst a forest of Ponderosa Pines. In the heat of the afternoon sun, the air was filled with the scent of pine oils. And talking about the air, the higher we got the clearer and cleaner it seemed. Quite a contrast that of smog laden LA at the start of the week. This was a climb that I really enjoyed and almost didn’t want it to end. But all good things must come to an end so cresting the final ridge I was greeted the magnificent sight of a fast smooth road snaking its way downhill.

I put the CV in to its highest gear and let rip. The CV responded to the challenge and led me downhill and effortlessly through a succession of sweeping curves. I could see the mileage to the end point rapidly falling away from the Garmin in front of my eyes. All to soon I was into Prescott and at my hotel. And let me share a little secret with you. Arriving at my hotel I joined the Mile High Club. No, not that one – tut, tut for thinking such thoughts readers! Founded in 1864 and lying at an altitude of 5,400 feet Prescott markets itself as Arizona’s Mile High City! So on that note I think I’ll pop out to see what delights the city has to offer the weary cyclist.

I’d like to add a little footnote, literally to today’s stage report. With the heat of the day I have found that my feet have been swelling rather more than I’m used to. Consequently by early to mid afternoon my riding shoes, particularly the left one, have become quite cramped. So harnessing the power of the Interweb I did a spot of Giggling and discovered that just up the road from the hotel was the High Gear Bicycle Shop. Co-owner Cindy Alward, a delightful person, was on hand to fit me up with a new larger pair of shoes. She was even happy to measure and fit my cleats. The shop is a great place to visit and has an interesting display of old, steel-framed bikes. So if you happen to be passing by I recommend that you drop in. And on that foot(note) dinner beckons…