As today was another comparatively short day there was a possibility of fitting in a bit of sightseeing en route. Of course, the whole ride is really one massive sightseeing experience but today I might have a chance to get out of the saddle and walk around like a tourist! Waking up I could see that another sunny, cloudless day lay ahead. So after a breakfast of fruit, yoghurt, scrambled eggs on toast, croissant and coffee I was ready to roll down the road by 7:30.

The first part of the ride out of Prescott was very straightforward and although the roads were busy with people going to work it wasn’t too unpleasant. Unfortunately that soon changed when we turned on to Highway 89 where the traffic was pretty intense. It was a vivid reminder of recent days on the California Interstate but today actually seemed busier if that were possible. Fortunately we only had about 7 miles before turning on to State Route 89A and the start of the day’s main event – the ascent of Mingus Mountain. Mingus Mountain, that has a certain ring to it, doesn’t it? 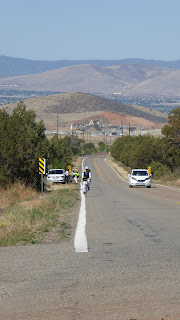 Ahead of me I could see the road stretching towards the ridge of mountains several miles away. Looking just beyond my front wheel the gradient was barely discernible but looking ahead I could tell that the road rose gradually upwards – climbing about 1,300 feet over the next 10 miles. This was a classic false flat. The scale of the landscape here was simply immense and I could see for several miles in every direction. Looking at the elevation reading on my Garmin I was surprised to see that I was already over 5,000 feet above sea level. Unfamiliar heights indeed for Captain Century whose more used to riding below sea level in the Fens of East Anglia. The air around me was incredibly clear and pure – so refreshing. Above me I watched what I think was an eagle (it had a huge wingspan) lazily circling around looking for its next meal. This was one of those special occasions where I felt totally at one with my bike and my surroundings. Man, machine and nature. Bliss! The CV purred along nicely too so I guess it was also pretty content.

Gradually the natural Ponderosa Pine forest got closer and with a gentle turn I was on to the mountain proper. With a light press on my Di2 gear shift I dropped on to the small chain ring, moved down the cassette a couple of cogs and started spinning at a cadence (80-85 rpm) that I hoped I could hold to the top of the climb about 10 miles and 2,000 feet ahead. 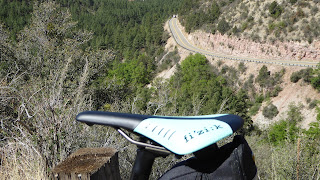 With an amazingly smooth surface the road meandered its way up the mountain mostly through gentle curves with a few classic hairpins which brought back happy memories of riding in the Pyrenees a couple of years ago. Interestingly, the gradient on the hairpins tended to be steeper than in Europe where on many climbs the gradient eases off on the hairpins. With relatively few cars on the road I was often able to pick a line towards the centre of the road on right hand curves and cheat the gradient. On left hand curves I stuck to the high side and eased down as I exited thereby both sustaining my cadence and speed. From time to time I slipped up into a higher gear and got out of the saddle to stretch my back and give my legs a little action. Then, easing back into a lower gear I settled back into my rhythm and enjoyed tapping out the miles.

I stopped a couple of times to admire and photograph the views when I could see road I had ridden several hundred feet below me, dotted with other riders also making their way upwards. With relatively little traffic much of the ascent was fairly quiet so I was able to enjoy the sights and smells that I passed through. With the morning sun warming the pines there was a lovely delicate scent in the air which felt really healthy. As I approached the top of the climb I just felt so lucky to be able to enjoy an experience like this.

Creating the summit of Mingus Mountain (7,023 feet) I saw the smiling faces of Mary and Robin which meant that I had arrived at the SAG. Pulling in, my enjoyment was made all the more complete when I spotted a rider with a Celeste Sempre who had just ridden up from the other side with a friend. After snacking on some fruit and posing for the obligatory summit photo I set off on the descent with Dave, Emil and Pete. We seem to have established ourselves as a quartet. Now readers, if you thought that my description of the ascent was engaging I have to say that I am struggling to find the words to describe the descent.

From a riding perspective it was everything the ascent was – smooth surfaces, long straights, sweeping curves with the occasional hairpins which meant that I could sit back in the saddle and let the CV do its work. Picking a line into the corners, leaning over and letting the CV pull me through its natural line. Just the odd touch on the disc brakes which scrubbed off some speed quickly and reassuringly just before the bends. 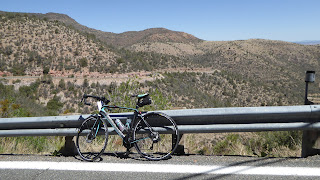 All of a sudden we burst out of the trees and below me I could see the most magnificent views with the road snaking its way downwards. As this wasn’t enough ahead of me at the bottom of the mountain I could see the landscape stretching away for at least 30 miles with red tinged mountains acting as a sort of frame or reference point for the vista. This is where we will be heading tomorrow and I can’t wait! 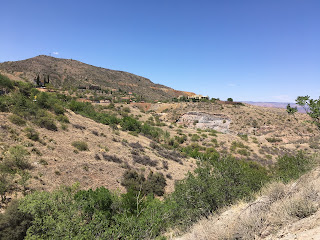 As today was a short day we had decided to stop in Jerome, an historic mining town, for lunch. Dave who had been here a couple of weeks before recommended a place to eat.  This was a chance to have my first proper American hamburger and I wasn’t disappointed. I chose the Arizona Special with a side salad and it was delicious. With only a few miles to go to our destination the four of us, together with Emil’s wife, enjoyed a leisurely lunch. (And big thanks Emil for treating us.)

After lunch we rode a couple of miles further downhill to visit the Jerome Historic State Park. This commemorates the town’s copper mining heritage and we had a look around the visitor centre which has an interesting collection of mining artefacts and photographs as well as a fascinating film telling the story of Jerome. The mining industry took off in the early 1880’s when William A Clarke bought out the existing mining interests, constructed a narrow gauge railway link to the main network and developed the operation to new levels of production. The Audrey Shaft, completed in 1918, descends some 1,900 feet. With the water table sitting at 1,300 feet, pumping water was a major consideration. Mining operations continued here until 1953. Since that time Jerome has reinvented itself as a popular tourist destination and achieved National Historic Landscape Status in 1967. The throngs of people in the large assortment of gift shops show that this has been entirely successful.

After a good look around we continued down the descent for a further five miles arriving at our overnight destination, Cottonwood, unusually early at 2:30pm. We all agreed that today we have had an excellent day at the office with a good working lunch! And the new shoes which I bought yesterday seemed to have done the job – no sore and swollen feet!