Today was a first for me on several fronts. The major feature of the day was that it was the first full stage in the desert. And we rode it on the Interstate (I-10). Imagine UK readers, riding along the hard shoulder of the M1 for about 80 miles! The only difference was that there was much less traffic. With temperatures in the mid-thirties/mid-nineties, keeping cool and staying hydrated were the keys to surviving. For the first time in my cycling life I wore a pair of Factor 50 arm coolers. Back home if I cover my arms with anything other than jersey sleeves then I wear arm warmers – to keep warm! On the hydration front, in addition to the two water bottles that I normally carry I was also wearing a Camelback with an extra 2 litres of water. This was a Christmas present from my daughter Megan. I also made sure that I had a copious supply of Factor 30 to slap on and protect my skin from burning. At this juncture readers, I would just like to report that my tan lines are progressing nicely and the pasty white skin that I feared might be the source of some merriment for the other riders, is rapidly disappearing.

One of the features of extended tours like this is that time is very precious. Unless we are staying right in the middle of our overnight base I don’t usually get a chance to explore. All I can tell you is that Indio sits on the edge of the desert and has a casino. How do I know this? Well, last night I had dinner in the casino! It was quite an eye-opener to me as I strolled past the rows and rows of slot machines and various gaming tables. I have no interest in gambling. My only experience of it was many years ago when a friend took me to a casino in Leeds. After exchanging £10 for some chips I sat down at one of the tables and laid my chips out. The croupier, who as I remember was very enticing, did what to me seemed like a fancy card trick, leaned forward and swept my chips away. At this point it dawned on me that I had lost! So realising that for me at least, this was a mugs game I have stayed away from gambling ever since. Of course, like many others I have had a flutter on the lottery or taken part in the office Grand National sweepstake.

My goodness, will you look at that. Yet again I seem to have drifted off the subject with another little diversion. So let’s get back to the main event. After leaving Indio apparently we crossed over the San Andreas fault line. I’m not exactly sure where as the earth certainly didn’t move for me. Then it was on to the only climb of the day a nice long, steady 12-mile ascent. This wasn’t especially steep and once again it was a case of getting in the right gear and tapping out a steady rhythm. From time to time I got out of the saddle to stretch my back and do a little dance on the pedals – a brisk foxtrot if you will! The main challenge was the heat as I was riding directly into the sun so I sweated quite profusely and every 10 minutes or so took a couple of swigs of water from my Camelback. It took me around one hour to reach the summit where the landscape opened out dramatically. Although we were still climbing I could see the desert stretching for miles ahead and on either side. We were riding along a broad valley, several miles wide and flanked on either side by rock bluffs. Look at the ride flyby above if you’d like to get a better sense of the scale of the landscape. 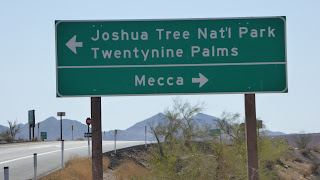 Ahead, the road stretched as far as the eye could see. As we rode along, I really did feel quite insignificant in such a big landscape. A glance at the map told me that we were riding along the southern edge of the Joshua Tree National Park – celebrated in the eponymous album of the same name by Irish rockers U2. A road sign caught my eye – if I left the Interstate I could either go north to the Park or south to Mecca – what a choice! I carried straight on eventually reaching the first SAG where I gladly, no gleefully, refilled my water containers. I had already drunk nearly two litres and we were still in the ‘cool’ part of the day. Alongside the rest area was a tank museum dedicated to General George Patton of WWII fame (he was born in California).

We (Pete, Dave, Emil and me) headed back onto the Interstate and with a tail wind and a gentle downhill profile organised ourselves with a spot of through and off, each taking it in turns to lead for about a mile before peeling off and tucking in at the back of the line. Riding at around 25mph mean that we had to keep a careful lookout for debris, mainly the remains of truck tyres that had blown out, which if hit could cause serious damage. The real challenge though was that the blow outs left small metal fragments (think staples) which embedded themselves in our tyres leading to punctures. Pete, Emil and I each had a rear wheel puncture as a consequence. And let me tell you, replacing a tube in the middle of the desert in the middle of the day is not a lot of fun! I was in luck as I discovered my puncture at the final SAG so at least I had the benefit of both some shade and a track pump with pressure gauge to inflate the new tube.

Riding along the Interstate wasn’t anything like as bad as I had feared. Most of the truck drivers pulled over to the outside lane when it was clear, giving us an extra berth. Quite a few gave us a friendly toot on their horns. I suspect that they must have thought we were quite mad when they passed us. There was one stretch which was very rough due to frost cracks so we christened it ‘The California Cobbles’ and imagined that we were riding Paris-Roubaix. There’s an irony for me here since the CV I am riding was originally designed by Bianchi specifically for the Paris-Roubaix. (It surpassed itself, incidentally.)

The long distance views and the straights were incredible. I will no longer complain about boredom again when riding in the Fens back at home. Compared to the Interstate, the Fenland roads are nothing. As we rode on I could feel the temperature rising to its peak at around 35C. I was getting through my water at a fast rate – both drinking it and also spraying it on my head and arm coolers. At our final SAG Paula had provided a cool box containing stockings filled with ice to wrap around our necks as an additional coolant. And very cool they were too!

Eventually we left the Interstate after riding on it for nearly 90 miles! By now, the combination of copious amounts of sun screen and road/desert dust on my skin meant that I looked like a tramp. But I felt pretty good. Tired and worn out, yes. But exhilarated too. I had survived the desert! The ride had one final delight in store for me. As we approached Blythe, Pete commented that the view ahead would make an iconic photograph so I obliged and pulled over to get the camera out. Pete carried on shouting over his shoulder that I would soon catch up with him. Iconic photo snapped, I got black on the CV only to discover that I had a front wheel puncture (another of those metal fragments). What bad luck, just 3 miles from the finish. As I was pumping up the tyre another rider, Ichiro who comes from San Francisco and who I haven’t seen much of so far, caught up with me. So we rode in together and had a nice little chat.

After having my clothes and body shower and the Route Rap for tomorrow we all gathered together for dinner. This was a rather different affair as Itchytoo had got some outside caterers to lay on a very tasty range of barbecue delights. With the addition of a can of cold beer I was one happy rider! And guess what …

… we’re going to do it all again tomorrow. Yaay!